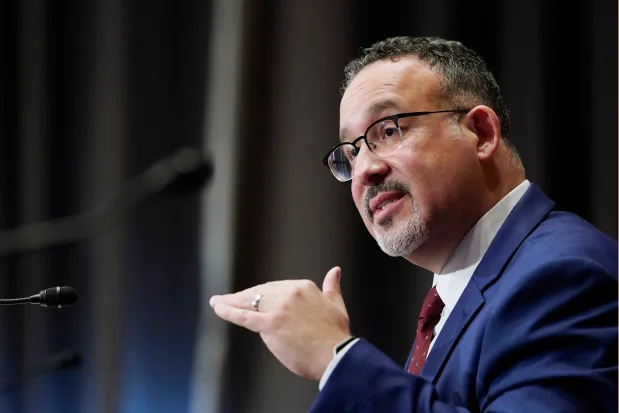 The situation seems to be tied to parents’ violent threats and outlandish activities in school board meetings across the country. Many of these meetings, which concern the curriculum being taught and COVID-19 safety protocols, school reopenings, virtual learning, and the “teaching” of Critical Race Theory, have led to screaming matches, protests, and even fights.

The Daily Signal reports the National School Boards Association sent the Biden administration a letter last September asking it to use the Patriot Act and other statutes to stop threats and violence toward school board members over actions that could be “the equivalent to a form of domestic terrorism and hate crimes.”

The report adds four days after the letter was sent, Attorney General Merrick Garland issued a memo to the FBI calling on them to “use its authority” against parents who threaten or commit violence on public school officials.

Cardona, who has already upset some during his tenure, denied the allegations in an interview with CBS.

“We didn’t ask for that letter,” Cardona said, adding that the real focus at this point should be “how do we authentically engage parents?”

“Moving forward, we have to have a better strategy across the country, to listen to parents and to make sure they’re engaged in the process,” Cardona added.

Students and teachers are beginning to speak out and walk out concerning how their state and local governments are treating them.

Some states are now dealing with angry students who organize walkouts across the country to fight COVID-19 protocols and a significant lack of virtual learning. Hundreds of students at Brooklyn Technical High School, one of the top high schools in New York City, staged a walkout Wednesday over concerns about the holiday spike in COVID across the country.

In Chicago, the teachers union approved the city’s new COVID-19 protocols to return to schools by a narrow vote after five days of canceled classes due to a teacher walkout.