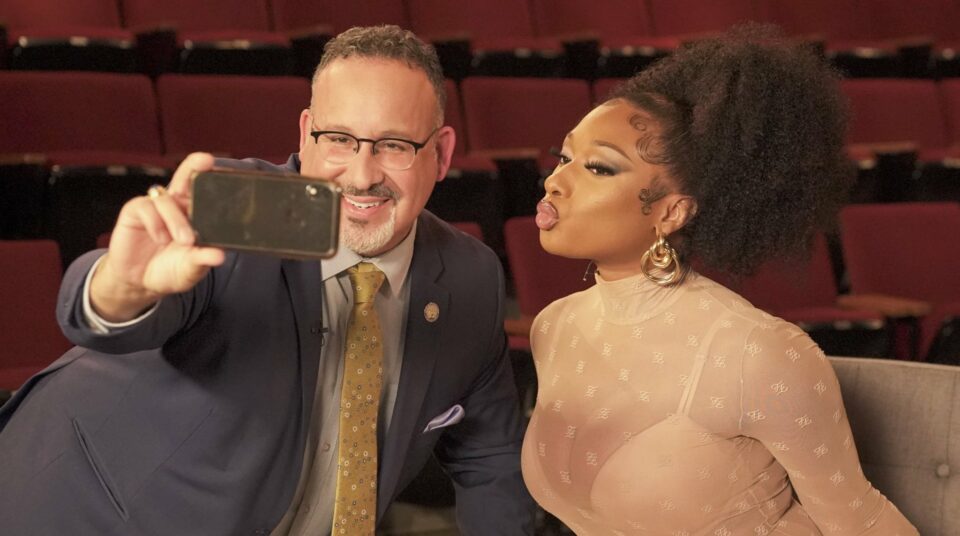 Education Secretary Miguel Carona, who said he was unaware of the Howard University student housing protest, poses for a photo with Meg The Stallion (Image: Twitter/@StallionAccess)

Education Secretary Miguel Cardona didn’t do the Biden administration any favors when he said Monday he didn’t know about the student housing protests at Howard University.

Cardona hopped on Power 105’s ‘The Breakfast Club‘ to discuss the Biden administration’s plan for HBCUs. However, when hosts Charlamagne Tha God and DJ Envy asked him about the recent student protests over the living conditions in dormitories, Cardona, who said earlier on the show that his job was to secure funding for colleges, admitted he had no clue about one of the top HBCU stories of the year.

“How did you feel when you saw the housing crisis at Howard University?” Charlamagne asked Cardona.

The Education Secretary didn’t answer the question, instead reaching for a bottle of water in an attempt to stall. DJ Envy appeared to notice Cardona’s hesitancy and asked him “Did you see it?”

Cardona, whose office is less than 3 miles from Howard’s campus in Washington D.C., finally admitted he was clueless of the student protest that lasted more than a month pushing for improved living conditions in dorms.

DJ Envy then gave Cardona a quick brief on the situation before Charlamagne wondered aloud how Cardona talked about how millions of dollars are going to HBCUs, but was completely unaware of the issues happening “right there in your backyard in D.C.”

Cardona, trying to save face, began hitting his talking points on President Joe Biden’s $1.9 trillion infrastructure bill and how it will benefit HBCUs.

“What I will tell you is that funds that are there are not only intended to support tuition and those things but also whatever needs those students have,” Cardona said. “Including housing.”

The statement didn’t stop Charlamagne from again poking Cardona, who attempted to escape the embarrassing moment by telling a story of when he had visited Howard’s campus and saw the community’s outreach concerning the COVID-19 vaccine.

“But you didn’t visit during that time!” Charlamagne said loudly.

In addition to HBCUs and the Howard protest, the hosts also asked Cardona about Biden ending the pause on student loan payments at the end of next month.

The secretary responded saying the Biden administration has been “aggressive” with its student loan debt forgiveness including billions of dollars that are provided in the American Rescue Plan and Build Back Better framework, an answer that rang hollow for the two hosts.