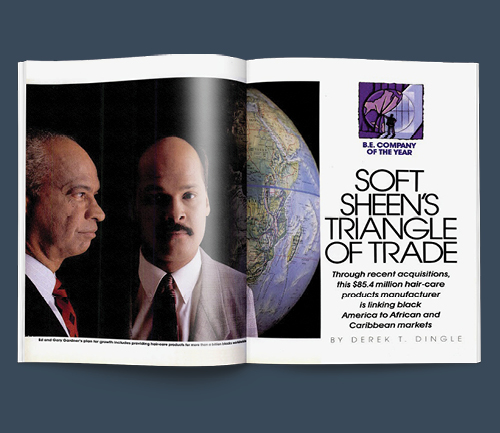 As founder of Chicago-based Soft Sheen in 1964, Gardner and his wife, Bettiann, operated their fledg-ling enterprise in the basement of their home. Over two decades, they built it into a mammoth Black-owned haircare manufacturer with global reach. With the introduction of the Care Free Curl line to both professional beauticians and retailers, Soft Sheen realized phenomenal growth as it capitalized on the popular Jheri Curl trend of the 1980s. Sales grew from $500,000 in 1979 to $55 million in 1983, catapulting Soft Sheen to No. 8 on the BE 100 list. By 1989, when it was named BE Company of the Year, Soft Sheen had acquired a London-based distributor and set up a worldwide network for customers in 66 countries to purchase its line of more than 150 products.