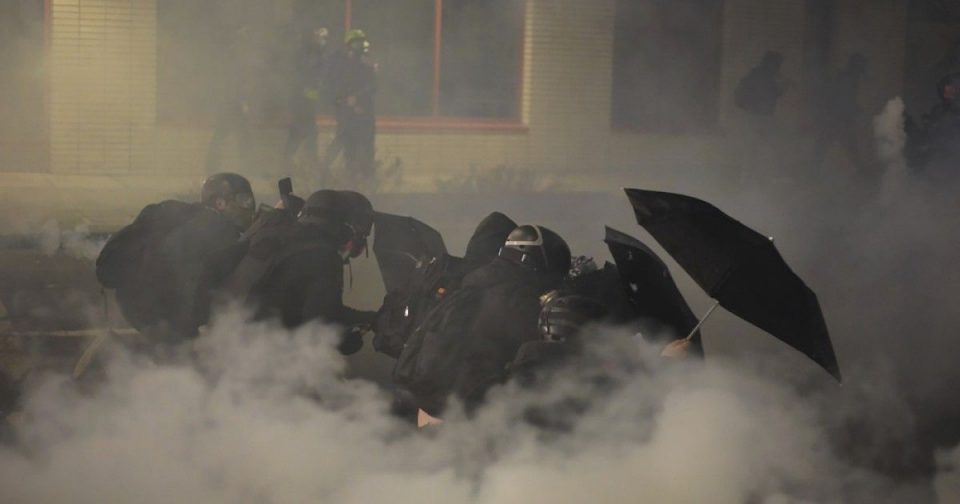 While the presidential inauguration went off without a hitch Wednesday, in Portland, protesters vandalized the state Democratic headquarters leading to eight arrests.

Sgt. Kevin Allen, the spokesperson for the Portland Police Bureau said in a video statement that at least four protests were organized for Inauguration Day, two of which were peaceful, but the others resulted in property damage and arrests.

Early in the afternoon, more than 150 people converged on Revolution Hall in Portland and marched to the Oregon state Democratic headquarters. While the crowd was still at Revolution Hall, officers on bicycles encountered the group who converged on the officers and even took one of the bikes.

The police got the bike back and the group moved on to the Democratic headquarters where, according to Allen, the group “smashed windows and vandalized the building.”

The crowd also began throwing rocks and surrounding Portland police officers. At least eight people were arrested in the incident on a litany of charges including felony criminal mischief, possession of a destructive device, and rioting.

The Democratic Party of Oregon said in a statement that no one was in the building at the time of the incident, but they are still upset by what happened.

“This is not the first time our building has been vandalized during the past year—none of the prior incidents have deterred us from our important work to elect Democrats up and down the ballot, and this one will be no different.”

A second group of more than 120 people protested outside of an Immigration and Customs Enforcement (ICE) building in the city Wednesday around 9 p.m. carrying pepper ball guns, fireworks, rocks, and protective equipment such as shields.

According to Allen, many in the group were wearing helmets and gas masks and within minutes of showing up began tagging the building with graffiti. Federal law enforcement agents began using “crowd control munitions.”

According to CNN, reporters who were on the scene believed law enforcement used pepper balls, tear gas,  and stun grenades to control the group.

Portland was the scene of numerous protests related to the Black Lives Matter movement. In July, federal agents clashed with more than 2,000 protesters and were forced to retreat. City residents also established an autonomous zone in Portland.