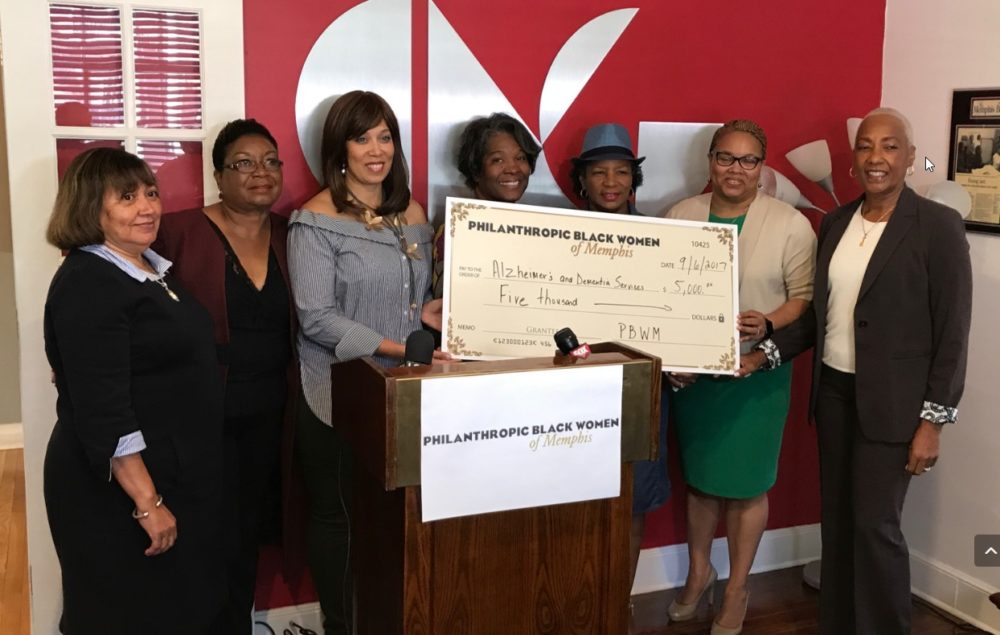 Photo: pbwmemphis.org The women of PBWM presenting a $5,000 grant to the Alzheimers and Dementia Services, Inc. in September 2017.

Black women helping others.That’s the mantra of eight African American women in Memphis, Tennessee, who banded together to form the Philanthropic Black Women of Memphis (PBWM) and have awarded 18 grants over 13 years totaling $55,000.

They have no board of directors. They don’t fundraise, either. And the money they’ve donated comes straight out of their own pockets.

Nelda Burroughs currently sits on the National Civil Rights Museum. Belinda Watkins is a former FedEx executive who now owns a Menchies franchise in southeast Memphis. Mary McDaniel, another former FedEx executive, now chairs the group’s foundation. Carolyn Chism Hardy sold her bottling company for more than $30 million and chaired the Chamber of Commerce; she now runs Henderson Transloading, which stores and ships products internationally by rail and boat. Deidre Malone runs an ad agency, has been a county commissioner, ran for county mayor, and now heads NAACP’s Memphis chapter. Monice Moore Hagler heads her own real-estate law firm, The Hagler Law Group. Edith Kelly-Green is a former FedEx VP and a partner of KGR Group, and Debra Evans is a partner of ViaSys Technology.

“We are not political. It’s black women coming together looking at what are the needs in our community and what are those things we can touch financially,” Malone said. “I think it’s important for them to see us working together and writing checks that can have an impact on our community.”

Ruthann Shelton, executive director of the Alzheimer’s and Dementia Services (ADS) of Tennessee, Inc., said when her organization needed funds while she was planning its annual Caregivers Conference, a staff member recommended they apply for PBWM’s grant.

“Our assistant development director, Judy Davis, told me about a group of women that might be able to help,” Shelton told Black Enterprise. “We submitted the proposal and they liked the project and we were able to get the grant that we needed.”

Shelton said her organization was able to purchase the much-needed resource materials for the conference and the children for whom she’s responsible.

“When we have new families come into our support groups, we give them little tote bags, which the grant we received funded,” Shelton said.

“We don’t base our student attendance on performance. If we have space for a child, we accept that child. So we might not get the highest performing students, although we do have some,” Tari Harris, the Head of School at Binghampton Christian Academy told WREG.

“It allowed us to expose them to different field trips, different arts programs. It also allowed us to provide them with snacks and basic needs like clothing, coats,” Harris said.

Although all of the charity’s donations have been to organizations within Tennessee, the women say they want their impact to resonate across the country.

“We want to be a role model, a model not just for Memphis but around the United States that there are black women who are connected with the community and who are actually responding to the community in the right way,” said Hardy.

“I think it can be greater when other African American women, young women, come together and look at us and see they can have this same kind of impact that we are having if they come together,” Malone said.