Ellen DeGeneres Gives $20,000 Scholarship To Black Teen Who Was Told To Cut His Dreads 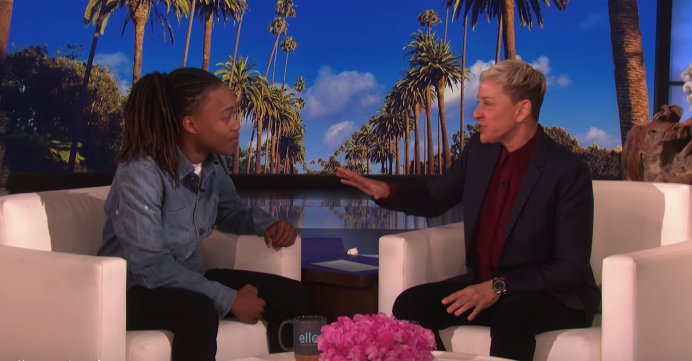 DeAndre Arnold, a high school senior from Texas, was given a $20,000 scholarship by Ellen DeGeneres.  Arnold made national headlines when it was reported that he would have to cut his dreadlocks to be allowed to walk in his high school graduation.

In an episode of “Ellen” on Wednesday, Arnold got to discuss the situation with the Barbers Hill Independent School District (ISD) in Mont Belvieu, Texas.

“I’m sure this is not easy or comfortable for you,” DeGeneres said referring to his appearance on television. “But I want you to just relax and know that I’m here for you.”

“You get good grades,” she said. “You’ve never been in trouble, ever. This is the first time anything has come up. And now, you haven’t been in school for weeks because of this situation.”

Arnold informed DeGeneres and the audience that he has been suspended from school for violating the district’s hair length policy.

“Every day I would go to school, I would be in dress code,” Arnold told DeGeneres. “But the thing with them is, if it was let down, I would be out of dress code.”

“I just personally think you should be able to wear your hair however you want, especially if there’s girls with long hair,” DeGeneres said. “What’s the difference if girls have long hair and if guys have long hair?”

“It’s really important to me because my dad is from Trinidad,” Arnold told her, discussing that the way he wears his hair is part of his culture and heritage. “I really wish the school would kind of be open to other cultures and just, at least let us try to tell you some things. Don’t just shut us out.”

After coming back from commercial, DeGeneres made a plea to the Barbers Hill Independent School District to reconsider their decision and “do the right thing”.  After that, she surprised Arnold with a $20,000 scholarship, presented by Alicia Keys.

“I want to tell you that, I couldn’t believe the story when I heard it,” Keys told Arnold. “And I’m super proud of you for standing up for what you know is right. And I know that the school needs to do the right thing.”