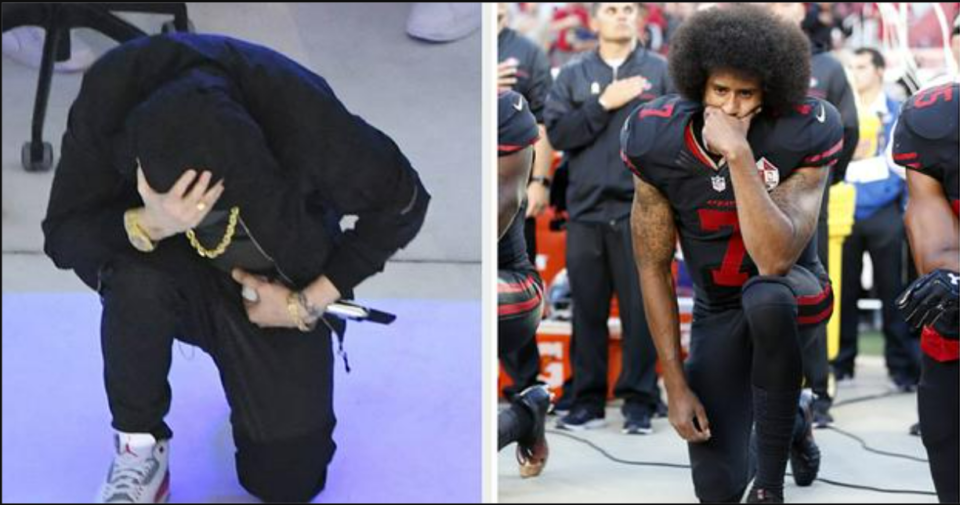 One particular moment that struck a chord was when Eminem took a knee after his rendition of his 2002 hit “Lose Yourself.”

While Dr. Dre played Tupac’s “I Ain’t Mad At Cha” on a nearby piano, Eminem remained on a knee and held his head in his hand. Speculation credits the gesture as a tribute to former quarterback Colin Kaepernick’s protests, in which he used kneeling to protest against police brutality and racial discrimination.

Kaepernick, a former quarterback for the San Francisco 49ers, was heavily criticized for this form of protest during the national anthem at a 2016 preseason game. The widespread controversy also rained down on the NFL for its inability to handle player activism. Since then, he has not joined another NFL team.

This wouldn’t be the first time Eminem supported Kaepernick’s efforts. In 2017, during the BET Hip Hop Awards, he embraced Kaepernick’s message on racism and police brutality while performing a freestyle rap. He also name-dropped Kaepernick in the lyrics of his 2017 song “Untouchable,” where he rapped:

While headline reports indicate that the NFL was unaware of Eminem’s move, Brian McCarthy, an NFL official, denies them.

“We watched all elements of the show during multiple rehearsals this week, and we were aware that he was going to do that,” he told ESPN.

Additionally, other reports claim that Dr. Dre and Snoop Dogg were censored regarding their set. According to Puck, the league was uncomfortable with Dr. Dre’s lyrics and Snoop Dogg’s attire which they thought appeared to be “gang-related.”