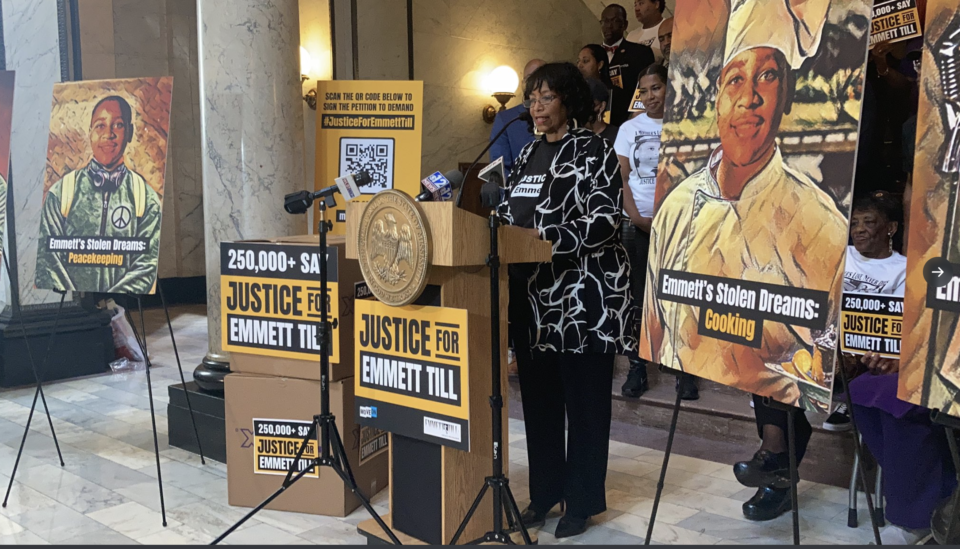 Emmett Till’s family wants the U.S. Justice Department to overturn their decision to close the investigation of the Black teenager’s 1955 lynching, according to the Associated Press.

August 1955 in Mississippi, Roy Bryant and his half brother, J.W. Milam, kidnapped the 14-year old Black boy from Chicago for whistling at Bryant’s wife, now known as Carolyn Bryant Donham.

The two men tortured the Till, shot him in the head, attached a 75-pound cotton gin fan to his neck using barbed wire, and threw his body into the Tallahatchie River. Detectives discovered his decomposed remains on August 31, The New York Times reports.

An all-white jury acquitted Bryant and Milam, who later admitted to killing Till in an interview with Look magazine, according to AP.

Till’s family and supporters want to bring Carolyn Bryant Donham, who lives in North Carolina, to justice before it is too late.

“Time is not on our side,” said Till’s cousin, Deborah Watts, at a news conference, ABC News reports.

Michelle Williams, chief of staff for Mississippi Attorney General Lynn Fitch, is doubtful that the Justice Department will rescind their decision to re-examine the case they closed in December and charge Donham.

“This is a tragic and horrible crime, but the FBI, which has far greater resources than our office, has investigated this matter twice and determined that there is nothing more to prosecute,” Williams said in a statement, according to the AP.

Government authorities reopened Till’s case when the 2017 “The Blood of Emmett Till” novel by historian Timothy B. Tyson documented that Donham confessed to lying that Till attacked her; however, there was no proof to verify his record. Her family members also denied that she recanted her testimony, and Donham told the FBI that she still stands by her story, the Justice Department reported, according to ABC News.

On Monday, the Senate passed the Emmett Till Antilynching Act of 2022, which makes lynching a federal hate crime, and now, President Joe Biden’s signature to make the bill into an official law, CNN reports.