Why The End Of DOMA, Prop 8 is a Good Thing [Opinion] 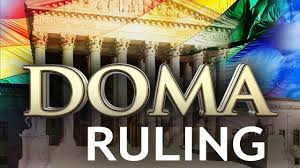 June is officially LGBT Pride Month. So, it seems fitting that the U.S. Supreme Court rendered rulings in two historic cases: Hollingsworth v. Perry, the challenge to California’s Proposition 8, and United States v. Windsor, the case challenging the Defense of Marriage Act (DOMA). In a 5-4 vote, the Supreme Court struck down Section 3 of DOMA, which prevented same-sex couples who are married and living in one of the 12 freedom to marry states and the District of Columbia, to be eligible for some 1,100 federal protections, rights, and benefits afforded all other married couples. The Supreme Court declared same-sex couples married in states where it is legal must receive the same federal health, tax, Social Security and other benefits that heterosexual couples receive. The Supreme Court’s ruling against Proposition 8 will once again allow the state of California to recognize same-sex unions under the law.

The Supreme Court dismissed the Proposition 8 case on the grounds that traditional marriage activists who put Prop 8 on a ballot in 2008 did not have the constitutional authority or standing to overturn the California Supreme Court’s ruling that same-sex couples had a constitutional right to marry. The proposition did not affect domestic partnerships in California or same-sex marriages performed prior to the 2008 Election. On DOMA, the court ruled that the statue is unconstitutional, in violation of the Fifth Amendment, which guarantees the right of equal protection under the law. DOMA displaced protections and injured same-sex couples living in states where their marriages are legal, thus, discriminating against a class of people.

In a statement written on Air Force One en route to Africa, President Obama stated “this ruling is a victory for couples who have long fought for equal treatment under the law; for children whose parents’ marriages will now be recognized, rightly, as legitimate; for families that, at long last, will get the respect and protection they deserve; and for friends and supporters who have wanted nothing more than to see their loved ones treated fairly and have worked hard to persuade their nation to change for the better.â€

While the Rev. Williams Owens, president of the Coalition of African American Pastors stated the court’s ruling “neglected our most precious children who need a mother and a father united in marriage for healthy development. The African-American community has already been plagued with problems related to children growing up in single parent households. This ruling will only accelerate the further erosion of our communities and society.â€ He also called for African-Americans and the Christian community to rise up to protect marriage.

Regardless of all the rhetoric or where any one individual or group stands on these decisions, the Supreme Court did not rule that gay and lesbian couples have a constitutional right to marry. That question remains very much alive. The impact is at the state level. Those 30 or so states that continue to outlaw same-sex marriage and define marriage as between a man and a woman will see no direct change from the court’s decisions. Historically, states have decided who can marry within their borders. That is still the case.

What is really at the heart of this matter is that laws that are passed to assert government control over perceived morals are wrong. You can’t condemn or punish a group of people through legislation. These rulings were about judicial prudence vs. ideological beliefs.

Opponents argue that same-sex marriage represents a threat to traditional marriage, which is a sacred institution. They also often characterize LGBT persons as immoral. Yet, these same hypocritical opponents are silent when confronted about state laws and Biblical passages regarding divorce–”What God has joined together let no man put asunder.â€ The only one exception is adultery.

Not only in this country can you file for a divorce less than two weeks after exchanging sacred wedding vows (even though it may take several months before a divorce is granted), you have several grounds for a divorce, including no fault, lack of financial support, irreconcilable differences, incompatibility, and impotency. Civil marriage much like divorce should not governed under any religious jurisdiction.

Same-sex marriage opponents also argue that such marriages erode traditional families. Yet, our nation’s families are anything but the traditional definition of a mother, father, 2.5 kids, a dog and a white picket fence. Also, in African American communities traditional families have included grandparents and extended family members raising children. Today, nearly one-third of America’s children are being raised by single mothers, 54% for African American children.

When it comes to harmful effects, recent studies now show that children raised in same-sex households are growing up happier and healthier than children raised in other households. Whereas there are studies that show the harm done to the social and emotional development of fatherless sons and daughters–having an absentee dad negatively impacts their lives.

Allowing gay and lesbian couples to marry merely expands the definition of family providing inclusion to a group of people that have been shunned and persecuted.

Here’s hoping that next up, the United States Congress after nearly 20 years will finally pass the Employment Non-Discrimination Act. Federal laws protect workers from being discriminated against because of their sex, race, religion, national origin, age and disability–but not sexual orientation or gender identity. It is legal for employers in 29 states to fire someone for “being gay” or refuse to hire LGBT job-seekers.

It has yet to be seen whether the Supreme Court’s rulings will dramatically change the trajectory of the movement for LGBT equality. In the same week where Americans can celebrate the end of DOMA and the dismissal of Prop 8, the Supreme Court struck down key provisions of the Voting Rights Act intended to prevent voter suppression and discrimination. That ruling also is integral to expanding the freedom to marry in those 38 states that do not recognize same-sex marriages. So, while we should applaud steps towards LGBT equality the fight for justice and unalienable rights for all marches on.