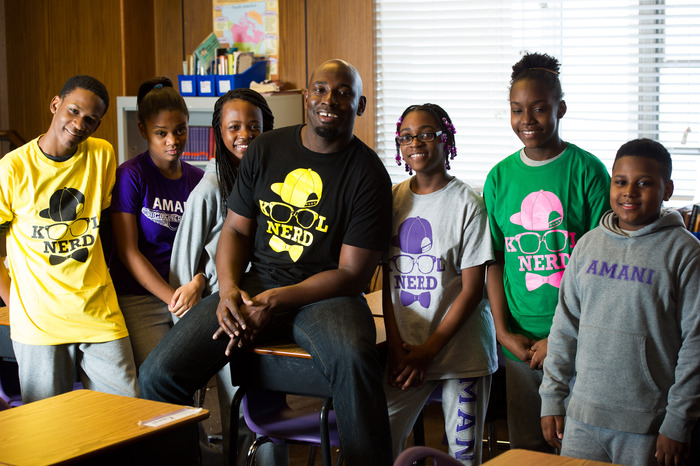 Recognizing the influence that great mentors and teachers had on his life, Orane Barrett, a former engineer at Intel, turned his passion for learning and helping the community into a business.

Launching the apparel brand Kool Nerd Clothing (KNC) in 2013, KNC is more than just a clothing line that helps individuals celebrate their intelligence. With proceeds from the sell of its items going towards its partnership to help get inner-city kids involved in STEAM, with the ‘A’ standing for arts, Barrett is determined to use KNC as a movement that exposes children to learning opportunities beyond what they see in their neighborhood.

BlackEnterprise.com caught up with Barrett to get insights on what prompted him to start KNC, how he’s using his clothing line as a platform to impact the youth and how his Kickstarter campaign will take KNC to newer heights.

BlackEnterprise.com: Can you briefly describe how Kool Nerd got started?

Orane Barrett: From the beginning it was a team of people looking at where the market was in terms of how people were embracing intelligence. We started to discuss how right now there’s no particular brand for that individual that wants to say they’re intelligent or they’re a nerd and I wanted to basically promote that. In addition, it also grew from basically creating a number of products that would just say “Kool Nerdâ€ and make a statement. We said, “Okay, how do we use this to compliment and motivate and inspire?â€

Now you used to work as an investment manager, correct?

Yes, I‘ve been in investment banking and previous to that I was an engineer at Intel.

How was it making a transition from those fields to starting Kool Nerd clothing? What skills did you take from your old job to start your own business?

The skill sets I’ve gained working at Intel were the stronger ones in the sense of really being an engineer and managing a production line management and a team of people. Then working in finance allowed me to really focus on the finances and operations. [It also] put me deep into developing a business plan, which makes you look at the venture from different angles, such as the pros and cons, and the competition. So, all of those skill sets along with my graduate education from MIT [Sloan School of Management] played a part in helping us to hone the message and marketing strategy.

How long has Kool Nerd Clothing been in business?

We started the concept in 2012. Then, in 2013 we did a proof of concept and launched with one graphic t-shirt. We ran that for about 3-4 months and got a good amount of sales during that period of time through either word of mouth or individuals just coming to the site. The site was originally an e-commerce site and I pulled the string on it and said “Ok, we need to pull the team together and really start to flush out the idea of what it is that we’re really trying to do here. What is it that we aim to do with this venture because we didn’t want to be another ‘t-shirt company.’ How could we really motivate and inspire and do the things that we all stand for?â€ So I would say the last 6 months was really spent flushing out the venture.