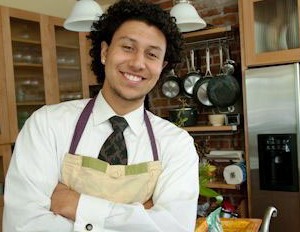 He’s right: Nothing in particular (except maybe your mom’s) comes to mind. But if Fyffe, 24, has his way, dessert lovers across America will soon fill in that mental blank with the name of his eponymous company, Charlie’s Brownies, which he launched while a student at the University of California at Berkeley. After graduating two years ago, he moved the operation back to his hometown, Los Angeles.

While at Berkeley, he cut his entrepreneurial teeth by partnering with Tully’s Coffee (a prominent chain in the Bay Area) to stock his gourmet bites; he also founded the Baking Club of Berkeley, a community of local pastry chefs. Back in L.A., he has focused more on catering and expanding his product line, which now includes vegan and gluten-free treats.

An unabashed fan of pop-psych business guru Malcolm Gladwell—he can quote sections of The Tipping Point at length—Fyffe has garnered plenty of notice for his delectable confections. Charlie’s Brownies was one of the first businesses brought into the funding-and-mentoring program of 100 Urban Entrepreneurs, the nonprofit organization that provides $10,000 startup grants and eight weeks of business mentoring to urban entrepreneurs nationwide.

Fyffe—who in 2010 was named a Jackie Robinson Foundation Scholar—plans to spend the rest of 2012 broadening his menu, cementing relationships with retailers and continuing to boost his e-commerce capabilities. (Brownies, it turns out, ship cross-country better than you might think.) Through it all, his treats will remain all-natural, crafted by a self-taught master who now puts business precepts in the service of delicious dessert. “I use no preservatives or artificial flavors,â€ he says. “Just natural ingredients and home-baked love.â€ A heady recipe, in other words, for sweet success.

Learn moreÂ aboutÂ Charlie Fyffe and Charlie’s Brownies in this Q&A on 100UrbanEntrepreneurs.org