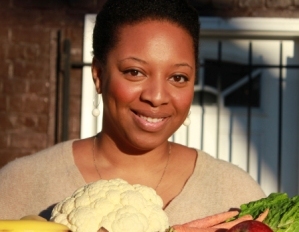 It is a cruel paradox of modern life that obesity—seen in centuries past as proof of wealth in a world where there often wasn’t enough food to go around—is, in America today, a particular scourge of the poor, who have ready access to the empty calories on offer at fast-food establishments but much less to fresh fruits and vegetables.

One of the most arid of these so-called “food desertsâ€ is the Detroit metropolitan area. Detroit’s numerous economic problems have been well-documented, but its nutrition crisis is, if anything, even more acute. As Jenile Brooks—a Motor City native whose professional background is in television and film production – notes, there hasn’t been a single major grocery chain within Detroit’s city limits for years.

Through her company, Harvest Express, Brooks, 30, aims to change that. The business “grew out of my interest to better serve Detroit as a native of the city and someone who recognizes the pervasive reach of food, particularly as it relates to health and education,â€ she says.

To help further her ambition, Brooks and Harvest Express were recently brought into the funding-and-mentoring program of 100 Urban Entrepreneurs, the nonprofit foundation that offers $10,000 startup grants, as well as eight weeks of intensive business mentoring, to young entrepreneurs nationwide. Formerly called Oasis Organics, Harvest Express is an online grocery that will offer delivery to businesses and homes throughout Detroit, focusing on Michigan-grown food, whether organic or not—produce and packaged goods at first, with plans soon to include meat, dairy, seafood, bread and assorted household items.

“A simple change in Detroiters’ access to fresh, conventionally grown food might encourage consumers to make healthier food choices in a way that offering [just] organic might not, particularly because organic produce is often more expensive,â€ Brooks says, explaining her business’s name change and shift in emphasis. “Also, food that is as local as possible has the benefit of increasing movement in the local economy in a way that organic food doesn’t.â€

Her commitment to her hometown is total; a 2003 graduate of Howard University, she worked in broadcasting and film in New York for years before deciding to move back to help Detroit emerge from nutritional purgatory. The Motor City’s manifold problems cannot be cured by produce alone, of course. But Brooks’s company will help bring one troublesome aspect of the city’s difficulties back into balance—a positive end in itself as well as a (nutritious and delicious) boost to the its entrepreneurial culture.

“As a native Detroiter, I was called home, so to speak, because of the need I saw,â€ Brooks says, noting that the renaissance the city has been attempting to showcase (in Super Bowl ads and elsewhere) is real, if fitful. “Detroiters are resilient, and deeply committed to the city,â€ she continues. “A lot of what’s working is the result of community-led movements and collaborations between existing organizations and new young energy.â€

Learn more about Jenile Brooks and Harvest Express on 100urbanentrepreneurs.org.

Are you an entrepreneur? Then join us at theÂ 2012Â Black Enterprise Entrepreneurs Conference + Expo hosted by Nationwide, May 23-26, at the Hilton Chicago Hotel in Chicago, IL where small business is BIG BUSINESS. Expect innovative sessions, high-powered speakers, and an early peek at the products, trends, and services you’ll need to stay ahead of the curve.Â Beat the March 16 Early Bird deadline to get a $200 registration discount at www.blackenterprise.com/ec/! And be sure toÂ nominate your company or another business for our Small Business Awards!Â Want to pitch your business idea and win $10,000? Don’t miss the chance toÂ enter our Elevator Pitch Competition before March 30 to qualify for the $10,000 grand prize. To register and find out more, visitÂ www.blackenterprise.com/ec/