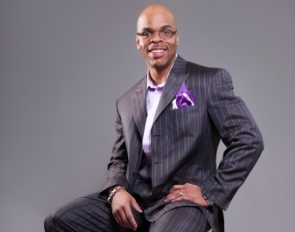 At first glance, this self-made brother’s rags-to-riches story may remind you of Tyler Perry‘s.

An Internet marketing rock star, who provides motivational and business-building advice to CEOs, start-ups and mom-and-pop-style businesses, Stephen Pierce went from being broke and homeless on the streets of Washington, D.C., to a multimillionaire living in a 12,000-foot mansion inside a gated community on 4.3 acres in Texas.

A former gang member and drug dealer who once got shot during a deal gone wrong, Pierce, who will host a business coaching session on “7 Steps to Creating Your Own Money Making Machine” at the Black Enterprise Entrepreneurs Conference in Atlanta this weekend, says it was his experience with some of life’s greatest lows: going bankrupt, being kicked out of high school–even struggling with thoughts of suicide and homicide–that helped him draw the connection between thoughts and actions.

“I was shackled by feelings of doubt and self-worth,â€ admits the 42-year-old entrepreneur and motivational speaker, who held various gigs as a business arbitrator, vinyl repairman, door-to-door ad salesman and telemarketer before hitting pay dirt. “But when I hit rock bottom, I started reading the Bible like crazy,â€ he says of his aha moment. “It reminded me of what I could achieve if I believed in myself and did what it took to succeed.â€

Pierce says it was no coincidence that this realization hit him around the time the Internet was taking off in the early 90s. Discovering he had a talent for choosing futures and commodities after learning more about the Internet, the business and marketing whiz began giving away free trading tips via email. Once he realized his advice was worth more than $700,000 dollars in net profits, he started a membership site, gradually broadening his reach into all areas of Internet business. Having worked with several Fortune 500 companies like American Express and Ford Motor Company, Pierce now teaches small brick-and-mortar businesses how to reach their customers in cyberspace using social-media tools like Facebook and Twitter. His consulting, coupled with the sales of his educational videos, audio products, seminars, coaching and other cheerleading strategies, helps the self-described “success sculptorâ€ rake in millions each year.

And he says you, too, can become rich by following his “M.O.S.T.T.T.â€ useful advice:

“M is for mission,â€ he explains. “To succeed we have to ask and answer one question: ‘Why must I win?’ It has to be about more than money because that won’t be fuel enough to sustain you during the rough times.â€

“O is for ‘operations,’â€ he continues. “Where can you win? Where you can make money? You have to look at the digital or physical terrain to find what is most favorable.â€

“S is for ‘strategy,’ he says. “How can you win? What does it take to win — specifically where can we win?â€

“Most people fail in business because they operate with three Ts on a day-to-day basis but don’t connect to the bigger picture,â€ Pierce advises. “If you’re not connected to the overall vision, you won’t succeed.â€

Small business is BIG BUSINESS at the 2012 Black Enterprise Entrepreneurs Conference + Expo hosted by Nationwide, May 23-26, at the Hilton Chicago Hotel in Chicago, IL. Expect innovative sessions, high-powered speakers, and an early peek at the products, trends, and services you’ll need to stay ahead of the curve. Beat the March 16 Early Bird deadline to get a $200 registration discount at www.blackenterprise.com/ec/! And be sure to nominate your company or another business for our Small Business Awards! Want to pitch your business idea and win $10,000? Don’t miss the chance to enter our Elevator Pitch Competition before March 30 to qualify for the $10,000 grand prize. To register and find out more, visit www.blackenterprise.com/ec/