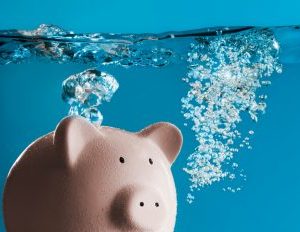 Have you ever sat through a really bad movie instead of walking out, because you didn’t want to waste the price of tickets? Or, have you worn a pair of shoes that really hurt your feet, but you wear them because they were really expensive?

These are all examples of sunk cost fallacy.Â BehavioralEconomics.comÂ defines the term thoroughly:

“Individuals commit the sunk cost fallacy when they continue a behavior or endeavor as a result of previously invested resources (time, money or effort) (Arkes & Blumer, 1985). This fallacy, which is related to status quo bias, can also be viewed as bias resulting from an ongoing commitment. For example, individuals sometimes order too much food and then over-eat ‘just to get their money’s worth’. Similarly, a person may have a $20 ticket to a concert and then drive for hours through a blizzard, just because s/he feels that s/he has to attend due to having made the initial investment. If the costs outweigh the benefits, the extra costs incurred (inconvenience, time or even money) are held in a different mental account than the one associated with the ticket transaction (Thaler, 1999).”

Business schools have a saying about sunk cost fallacy: “Throwing good money after bad.â€ You can make an initial investment in your business–be it in people, money, or time–then not see results, but keep the same routines associated with that investment.

Businesses do this all the time. For example, they may keep a poorly performing employee, or they may pay a monthly fee for software that the business doesn’t really need because it initially took a lot of time and money to set the software up and train employees to use it.

Envato Tuts Plus, a tutorial website and marketplace, offers great advice on how not to fall into the trap of sunk cost fallacy, which can lead to bad business decision-making. Here are a few suggestions from its article, titled Sunk-Cost Fallacy: How to Avoid Bias Based on Past Decisions:

It’s worth reading theÂ entire post from Envato Tuts Plus to learn more about sunk cost fallacy and entrepreneurship.