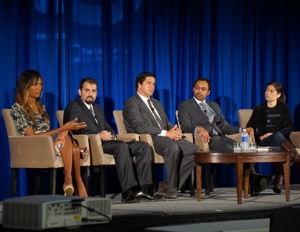 Speakers including Natalia Oberti Noguera, founder of The Pipeline Fellowship, and Shaz Niazi of the U.S. SEC talk raising money, raising your voice, and empowering women to look for funding.

The Black Enterprise Entrepreneurs Conference, sponsored by Nationwide, is underway in Columbus, Ohio. It kicked off on Wednesday with a one-on-one chat led by Black Enterprise’s Alfred Edmond, Jr., after which, Rodney S. Sampson, executive-in-charge of diversity and inclusion for hit TV show Shark Tank moderated a panel of entrepreneurs. The discussed raising capital through equity.

Sampson began by asking participants if they wanted to “own 100% of a startup that fails, or own 5% of Microsoft and be Bill Gates.â€ He said that less than 1% of angel investments go to black-owned businesses, thanks to the echo chamber that is the angel investment community.

“We have to see ourselves as investors,â€ Sampson said. “You don’t have to be an accredited investor to be an investor.â€

Noguera also recalled her experience as one of two women of color in a room of 20 white male angel investors, who form their opinions and decisions from other women in their lives. “The knowledge and the expertise of the women were in the room,â€ she said. “You know who wasn’t in the room? The women.”

Eddy, an entrepreneur who started his own global computer business, said, “A lot of women and minorities just don’t reach out to venture capitalists.â€

The panelists discussed whether the latter was due to a lack of knowledge or the inherent bias in the investing community.

Lauren Maillian Bass, who created Gen Y Capital, added that it wasn’t all the venture capitalists’ fault. “The people aren’t pitching. Everyone says they only get white guys through the door,” she said.