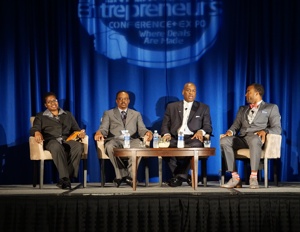 Moderator Carolyn Brown asked franchising experts about how they managed multiple franchises and the difficulties behind franchise expansion.

It’s day two of the Black Enterprise Entrepreneurs Conference, sponsored by Nationwide, in Columbus, Ohio, and serial entrepreneurs, and business owners from Columbus as well as around the world are taking advice and gaining experience from those who’ve succeeded in creating monumentally successful businesses.

One panel dealt with mastering multiple franchise ownership, and discussed strategies for owning and operating franchises in multiple regions.

While there were dozens of excellent tips shared throughout the panel, the most important ones involved the reasons for multiple franchising, and knowing when you’re stretching yourself too thin.

Former NFL player Michael Stone raised an important reason for franchising, especially if your career involves a product that breaks down–like the body of an athlete.

Stone founded the Professional Athlete Franchise Initiative after receiving a career-ending injury, and realized his career didn’t provide him with equity he could use to his advantage. “Franchising is a great vehicle for creating equity,â€ Stone said. His initiative has already helped over six athletes find grow their net worth through franchises.

Steven Taylor, who started his franchising business with Wendy’s in 1995, talked about expansion and when to start looking at ownership of more franchises. “You’ve got to know when to grow,â€ Taylor said, emphasizing the need for experience before embarking on the more challenging endeavor of running even more restaurants. “Not all growth is good growth.â€

Kevin Hicks, who left investment banking at Goldman-Sachs to begin his own firm, didn’t present franchising as a foolproof solution, but as a move that’s less risky than opening an untested business. “You’re not buying success,â€ Hicks said. “You’re mitigating risk.â€ Franchises are proven business models that have the support, familiarity, and convenience behind them. “Kevin & Michael’s Chicken Joint is much more likely to fail. If we put a Popeye’s there is familiarity.â€ Hicks’ firm, Blackman & Associates, is dedicated to aiding minorities raise capital and acquire Fortune 100 contracts.