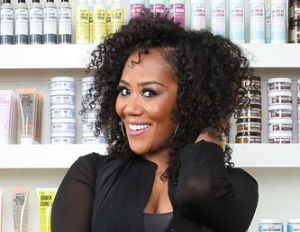 This routine has allowed Branch to get up close and personal with Miss Jessie’s loyal customers. Not only was it her chance to catch up with what’s going on in their lives–whether they were dating or having babies–but to find out what was going on with their hair.

Branch, 45, is the co-founder and CEO of Miss Jessie’s L.L.C. Whether it’s through the salon business or through the line of Miss Jessie’s curly haircare products, Miko and her late sister Titi, had the privilege of being part of a revolution in naturally curly hair since the 1990s. The Branch sisters’ story is a blueprint of how to design a business that can make waves in an industry.

Their tale is one of commercial evolution, taking a brand from the kitchen table of a Brooklyn brownstone to the shelves of global retailers, such as Target and CVS.

The enterprising duo managed to build a multimillion-dollar company from scratch.

Branch will join a panel of other black-owned hair and beauty business owners to discuss “Making Big Bucks in Specialized Markets,â€ at the Black Enterprise Entrepreneurs Summit. One of the first takeaways from Branch is that you don’t need money to transform an industry. “You don’t even need privileges or degrees. We didn’t have MBAs and we didn’t get bank loans or find angel investors. What we had was a seed of an idea and a solid foundation of family and influences to learn from and observe.â€

The key ingredient for success: Identify a need for your product and then find a way to create it. After being frustrated going through countless jars and bottles of creams, curl activators, mousses, grease, hair sprays, gels, conditioners, and oils–spending money on solutions that weren’t cutting it–the Branch sisters decided they needed to come up with their own exclusive salon formula.

“When we set out to come up with solutions for curls, kinks, waves, and natural hair, there was nothing in the marketplace,â€ recalls Branch. “Natural hair was categorized, for the most part, as braids, locks, or a free-form fro. Nothing really to embrace your natural curls.â€

Their inaugural haircare product, Curly Pudding, went on the market in 2004, followed by Curly Meringue, Curly ButterCrÃ©me, and Baby ButterCreme. They named their product business after their paternal grandmother, taking inspiration from her recipes. By 2010 a call came from Target, landing nationwide distribution in its retail stores.

At the time, there were 10 SKUs and 10 products in different sizes. The sisters took on only 225 stores and were able to scale up at a manageable pace in order to supply more than 1,000 stores.

Black VCâ€™s and Financiers Who Want to Invest in You