EPA's Jackson Urges Blacks Not to Miss the Green Boat 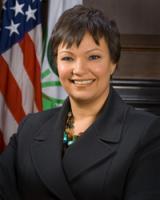 As the administrator for the Environmental Protection Agency, Lisa Jackson is directly involved in regulating and advising eco-friendly initiatives in President Barack Obama’s American Recovery and Reinvestment Act.

In addition to safeguarding air, water, and land,Â  Jackson is responsible for more than $7 billion in funding from the Recovery Act to invest in environmental protection and other infrastructure that will provide long-term economic benefits.

In honor of Earth Day, Jackson, the first African American administrator for the EPA, discusses how blacks and minority businesses can ride the green wave.

The president is meeting a great need. We have to follow him and realize that he is calling on Americans to embrace a completely different future. It will be a new economy and the best thing about a new economy is that it wipes the board clean and away and allows us an opportunity to get in at the ground floor and we should not miss that opportunity.

Air quality and protecting America’s water are some of your top priorities. Why?

Literally we need clean air to live, to be healthy, and we’ve had a series of setbacks in court decisions what I think are regulations that were either on the wrong track with respect to air. Although it has gotten cleaner, we’ve sort of stalled in our efforts to fight pollution as we move forward.

On water quality — we take water for granted. So we at the EPA, we really have only one mission, and that is to protect the environment. And there are only three big parts of the environment: air, water and the land. If the EPA is not out there doing its job for the American people, then they would have the right to question why we are here at all. We have to get to work.

How do you plan to attract and encourage small business owners and corporations to get on board with the green economy? What type of incentives will there be?

The Recovery Act will include both outright grants, and it will include loans and loan guarantees, and tax credits all in those clean energy and renewable energy fields.
We’re already seeing political and local leaders be very thoughtful about ways to really be transformative. Obviously the job part of it we touch, but we’re not leading. The White House has hired Van Jones from Green for All [to be the special advisor for Green Jobs, Enterprise and Innovation at the Council on Environmental Quality].