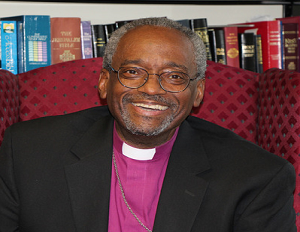 On Saturday, the Episcopal Church made history with the election of Bishop Michael Curry of North Carolina as its 27th presiding bishop.

Curry, who is the first African American to hold such a position, won by a landslide in a vote at the Episcopal General Convention. Serving as the bishop of North Carolina since 2000, Curry leads a diocese of 48,000 church members, 112 congregations and a network of ministries. He’s a graduate of Hobart College and Yale Divinity School and was ordained a priest in North Carolina, leading parishes there and in Ohio. He later served 12 years at St. James Church in Baltimore, Maryland, which was established in 1824 as the third black Episcopal congregation in the U.S.

At a news conference, Curry said his election is a “sign of our church growing more deeply in the spirit of God and in the movement of God’s spirit in our world.” His historic selection comes amid our nation dealing with the aftermath of the shooting death of nine black church members at Emanuel AME Church in Charleston, South Carolina and the Black Lives Matter movement that’s taking place in response to the countless unarmed black men and women killed at the hands of police.

“We’ve got a society where there are challenges before us. We know that. And there are crises all around us. And the church has challenges before us,” 62-year-old Curry told the assembly when he was introduced as presiding bishop-elect. “We are part of the Jesus movement, and nothing can stop the movement of God’s love in this world.”

Curry will officially be inducted into his new role Nov. 1 in a service at the Washington National Cathedral. He will succeed Presiding Bishop Katherine Jefferts Schori, who was the first female presiding bishop and the first woman to lead an Anglican national church.