Five Career Tips From Episode 6 of VH1's 'The Gossip Game' 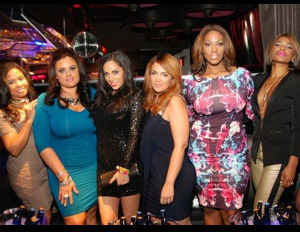 VH1’s The Gossip Game follows seven urban media professionals, as they navigate their way through the New York entertainment industry. From Hot97 to The Source magazine, these women are on top of their game. However, there is a lot to be learned from how these women interact with each other both personally and professionally.

While last night’s episode was a little less dramatic than the previous one, the girls didn’t find themselves holding back any punches. As Viv continues to deal with private family issues in a public space, Sharon and Jasfly are continue to learn how to handle relationships in this devious business. So if you want to learn how to truly make it in this industry with as few scars as possible, check out five career tips from last night’s episode of The Gossip Game:

1. Don’t Spread Your Legs For a Story

Ms. Drama was after an exclusive story from Star for her radio show, but Star’s initial response to her request was, “If you want to get that particular interview, that would require a sacrifice from you.â€ He then asks Drama to give her “intimateâ€ time in return for the interview. Although she laughs it off and negotiates the interview, this request happens all the time. So ladies, make it easy on yourself and keep your legs closed. In the long run, nothing good can come from you spreading your legs for 2,000 words.

2. Use Your Career to Create New Platforms

In the entertainment industry, everything seems to blend together. Magazine editors know the record label executives and radio personalities are friends with the artists. So when opportunities present themselves for you to upgrade your career by merging various media platforms, go for it. Wyclef approached K. Foxx about making a cameo in his new video, and for her, it lets fans put a face to the voice they hear every morning. If it sounds worth it, go for it.

3. Separate Your Love Life From the Industry

In last night’s episode, Jasfly mentions a new love interest, and while he too works in the industry, a good friend told her to keep him and her entertainment lifestyle apart while they get to know each other. It may be fun to be seen together from time to time, but if you want a real relationship to last, it’s best to explore your interests away from this business.

Be careful how deep or personal you work beefs go. Once things get a little too personal, things can go too far with no chance of reconciliation. And in Star’s case, he lost a job over his personal vendettas with a New York radio DJ. There’s nothing wrong with a little competition, but don’t let it control your life.

5. Be Prepared for [Unintentional] Backstabbing

The Gossip Game is like telephone: you’re hoping what hear down the grape vine is actually what was said, and in this industry it’s usually not too far off. Kim Osorio heard something a “friendâ€ said about her marriage, and didn’t take it lightly. While the person responsible for the commentary doesn’t “rememberâ€ saying any such thing, or didn’t mean to let such a comment slip, the camera doesn’t lie when the red light is on. People are going to slip up and say things they shouldn’t from time to time; you just have to be prepared to deal with it.