Eric Dickerson Loves the NFL; That's Why He's Criticizing It 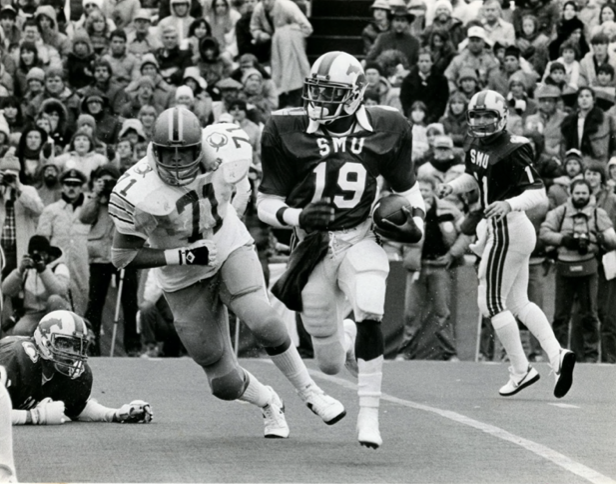 In a brilliant 11-year NFL career, Eric Dickerson routinely sped past defenders. He couldn’t outrun everything. The Hall of Fame running back with the Los Angeles Rams and Indianapolis Colts, now 61, knows something is off. He’s OK now. Very soon, though, he might not remember anything.

And there’s a lot on his mind. Watch My Smoke ($26.95, Haymarket Books, out now), written with People magazine editor Greg Hanlon, is the rare sports memoir that favors honesty over overwrought nostalgia. Whether the NFL’s single-season rushing leader is describing the raucous nightlife or observing drug use in an NFL locker room, Dickerson reveals the real NFL. It’s a bracing, transfixing read of the man behind the googles.

Today, Dickerson wants the NFL, that glittery, year-round sports colossus, to be better. It’s like an underachieving child: you love them, but you know they can improve. In this candid interview with BLACK ENTERPRISE, edited for clarity and space, Dickerson didn’t hold back.

“I was never going to be anybody’s kiss-ass,” he said last week.

BLACK ENTERPRISE: What do you think about Brian Flores’s lawsuit?

ERIC DICKERSON:  I think everything he’s staying is true. When we Black guys talk, it’s a different talk than when the white guys talk. It’s different for the Black players. Way different. Things haven’t really changed that much since I played. You talk to players and it’s still politics involved. They’re still going to hire the white coach over the Black coach. I know his daddy. I played with his daddy. Me and his daddy have been friends for 20 years. He might not be the most qualified guy, but it happens. It’s the same thing with playing time. If a Black guy’s playing great and the white guy is playing great, the white guy is going to get to start or they’re going to build him up. If the Black guy is a superstar and the white guy is a good player, they’re going to build [the white guy] up as much as they can. You might not want to admit it, but we live in a different world than the white person.

The NFL gave me a life that I could never have. I’m grateful for that. I love the sport. The politics and the bullsh** make you despise the sport that you love so much. That makes me sad. It’s like my mother said, “Eric, it’s different for you  It’s different for y’all.” They don’t want to admit it, but it is. How in the world is the NFL is 80% Black and there are three Black head coaches? It just baffles me. A [white] reporter said to me: “Let me tell you something. If the NFL was 80% white, there’s no way that you would be suffering with pension and healthcare. That’s how they see you:  it’s a bunch of Blacks.” And in a sense, they don’t really care. Look, the whole “we are family” crap that the NFL throws out there. They’re not our family. The players, we’re family, because we know the struggles out there. We know what it’s like playing. We know all the ups and downs.

It’s like when I tried to do stuff with the Hall of Fame to get a stipend for the guys, healthcare for the players, the reporters wrote like I was doing something wrong. What the hell was I getting out of it? Frustration. My thing was is that I want to help. I think we deserve better. We deserve to be treated better. That was all I was trying to do.

The NFL does stuff when it’s popular. It’s like when the Kaepernick thing came out, they didn’t like that. Now, all of a sudden, when George Floyd got killed, they want to put $250 million into it. OK. What’s changed? Nothing changed.

How do you align those feelings with working for the Rams and commenting about the NFL?

The NFL was good for me. It’s been good to me in the aspect of giving me an opportunity to play a sport that I love. But do they do everything right? No, they don’t. Do they do everything wrong? No, they do a lot of good. Trying to keep players safe; I think that’s great. They have programs now for life after football. That’s fantastic. They have mental programs if you have mental issues. I think that’s great. Those are things that I wish we’d had as players.

What they do a bad job of is not taking care of the players after they retire from football, like baseball and basketball. I had dinner with [basketball legend] Clyde Drexler three weeks ago. I said, “Clyde, you’re even.” He said, “Uh-uh. We’re above the owners. The owners listen to us. Y’all are in the outhouse.” They don’t care what we say. You know why? The players can’t stick together, so you can’t even blame it on the owners. You know who will stick together? The wives and the girlfriends who are attempting to take care of our old asses after we’re beat up and retired from sports. The women are the ones that really deserve it.

A great pension would be a great start. It’s always a fight with NFLPA (National Football League Players Association). DeMaurice Smith: He’s [NFL commissioner Roger] Goddell’s puppet. It’s a joke. That’s what he is. I spoke out against him a couple of weeks ago. Now, all of a sudden, I get a letter—they’re trying to deny my pension, my disability. I know what that’s all about. I’ve had a disability for 14 years, now all of a sudden I say something about him publicly. I know how it works with him. And I’m gonna fight it. I’m gonna win. But that’s how they operate. They operate on fear. They want you to fear them. They don’t want you to say nothing about him. They want you to go along with everything. The PA is supposed to help the players, yet they’ve hurt us. They’ve hurt the players so much, in so many ways

If you talked to someone coming into the NFL, what would you say?

If you’re lucky enough to get drafted high and make a lot money, man, put that money away. Don’t get into these deals like, “I got a friend over here, Little Pookie, he’s got a tech deal.” You can’t do that.  I think all of us have been suckered into the stuff that we didn’t’ know about. Invest in something you know. If you don’t know it, learn it or get somebody that you can trust that really knows it.

But just know this much: You’re going to be an old man a lot longer than you’re going to wear that NFL uniform. I think they don’t ever think about being 35, 40 years old, never playing that sport again. And it happens. I will never forget one of my first times I thought about it. I was in practice and we broke the huddle and I was in my stance and just something hit me: One day you will not be doing this. So be prepared.