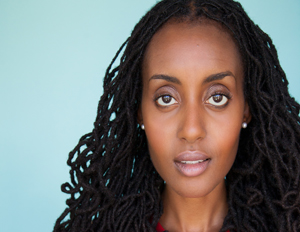 If you don’t know anything about the viral sensation out of Ghana called “An African City,” you may have been living under a rock. The Web series, created by Nicole Amarteifo and Millie Monyo, follows the lives of ex-pats in Accra, from their career and entrepreneurial pursuits to their journeys to find love in today’s Africa.

The show has been likened to HBO’s Sex & The City, and features five diverse women, one of which is Esosa Edosomwan, popularly known as Esosa E. She plays breakout character Ngozi, a spiritual vegetarian saving herself for marriage in an era where sex sells and young go-getters sow their wild oats—both professionally and personally—across the globe.

The character may be just an act for this entertainment star but not all of Ngozi’s reality is far from Esosa‘s. The Cornell and Columbia University graduate is of Nigerian descent who has forged a sustainable global career from fashion to filmmaking. She’s written and directed several short films including 50 Bucks in Argentina, which was an official selection in the 2011 Cannes Film Short Corner, MTV-U Film of the Week, and Best Short at the Nigerian Entertainment Film Festival. She’s also worked as a freelance fashion designer and as a model for editorials, print and commercials for clients such as Ford, Iman Cosmetics, Essence Magazine and more. Add to that she’s a vegan who swears by a raw diet and has a passion for promoting healthy eating and living for people with diverse palates and cultures.

BlackEnterprise.com caught up with this international millennial power woman to talk about her latest venture, a third book called Got Veg? How to Thrive on a Plant-Based Diet, what’s next for ‘An African City,’ and how she’s been able to customize her career journey to suit her multiple talents and interests.

BlackEnterprise: Many know you from ‘An African City,’ but let’s get to before that. How did you become an actress and what sparked your passion and interest for the industry?

Esosa E: I started acting a really long time ago. I fell into it. After school, I was in the New York area and did a lot of short films—really cool art films—and I worked in a project with Kevin Everson. These projects took me all over the world— including to the MOMA and Whitney—on the art film circuit. I’ve also been in Nollywood films, including Mother of George and films screened in Nigeria.

When I moved to the Washington D.C. area, a lot of people from New York were calling me for work. I had done two pilots, one for Brooklyn Shakara with actor Gbenga Akinnagbe [of The Wire] and then shortly after that we did the African City pilot. I had all these projects going … and you just never know what’s actually going to take off.

It’s been an interesting ride. Yes, An African City is what I’m known for but I’ve done a lot of films. It’s great becausee I feel like the more you work the more you learn. I’ve always had a very specific vision as an actress.

Whenever people would start that language about black women not being able to work, I’d always tune it out. My vision was always to be working internationally and doing work I felt moved the African diaspora of filmmaking to a new level. And I’ve been involved in a lot of projects that do that.

On the next page, read how Esosa E was able to customize her studies to pursue her dream careers and her journey working with global entertainment leaders …