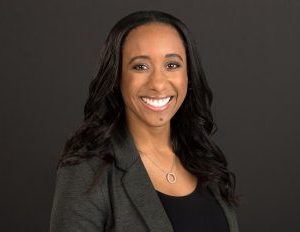 When you think of a senior publicist, you likely imagine someone, you know, “senior.â€ At sports media conglomerate, ESPN, this isn’t necessarily the case.

Having graduated with both a bachelor’s and master’s degree by 21, early success is no anomaly for Thompson–in fact, it’s the standard.

BlackEnterprise.com caught up with Thompson to find out how she did it, and what she plans to do next.

BlackEnterprise.com: How did you land a career at ESPN? Has your goal always been a career in sports/media?

Funny thing, but I actually wanted to be an editor-in-chief of a women’s lifestyle and fashion magazine like Seventeen or Teen Vogue when I was younger, but I found another interest when taking communication-based classes in college. I took it a step further and focused my master’s thesis on how and why male college athletes aspire to play their sport professionally more than female college athletes. I explored college funding, fandom, ratings, and viewership, among other things. It really got me invested and curious about pursuing a career in the sports industry.

How I landed a career at ESPN? Well, that’s probably a better question for my boss, ha!

Entering the industry at such a young age, how did you go about commanding the respect of your older, more seasoned and experienced colleagues?

[The late singer] Aaliyah said it best, “Age ain’t nothin’ but a number,â€ but some people instinctively second guess a younger person’s ideas, abilities, and commitment. I look older than I am, which benefits me in dealing with people who are small-minded.

I’m blessed to be on a team at ESPN where they welcome perspectives and thoughts across the table, no matter your title or age. They welcome, as well as look for various vantage points, to add to the conversation. You don’t get that at many companies, especially one as dominant as ESPN.

So, to circle back to the original question, I try to make my actions speak louder than words so that’s what comes across to my colleagues.

You’ve already accomplished so much, what are you aspiring to next?

Well, I’m not trying to follow anyone else’s five-year plan or the pace that was set by others more senior than me across the sports industry.

I attended the espnW summit last year and Robin Roberts [Good Morning America anchor] said something that still sticks with me, “Success leaves clues but you have to personalize it.â€ And that’s my driving motivation in my career aspirations.

How has being a young African American woman affected your career?

Being a black woman–no matter the shade or mix–is powerful. I take pride in being a black woman, especially with living role models like Michelle Obama, Oprah, Elaine Welteroth, Shonda Rhimes, and the many unsung heroes who have fed positive storylines of what a black woman can do, instead of what she can’t do. It gives me motivation that there’s no limit and that’s been my driving force to not dwell on any barriers, obstacles, or unfairness. You can either be a victim or a victor and I choose to make anything seeming like a setback into a set-up.

What makes you magical?

This may sound cheesy, but honestly, it’s the people around me. In public relations, you are an extension of the people you work with and for. ESPN’s on-air analysts and reporters are constantly on a hustle and flow and it motivates me to match their grind. And not only them, but those behind the scenes at ESPN from communications, production, marketing, talent management, social media, digital and so many others have a contagious energy that really is an adrenaline boost.

It’s like the energy that sports teams feed off of when they are playing at home and have a home-court advantageÂ because they’re able to use fans’ hype and excitement as momentum. I thrive off of energy and I feel like it’s important to find that in whatever and wherever you are building your career.