ESPN Will Have Bitcoin-Sponsored Football 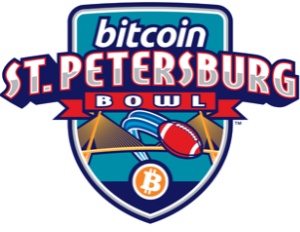 While it definitely isn't the first bitcoin-sponsored event, it is the first one sponsoring a college football game.

Contact sports are usually associated with bone-crunching hits rather than number-crunching computers.

But one U.S. based Bitcoin startup is changing the perception of the virtual currency in a major way: by sponsoring good ol’ gridiron football.

According to Business Insider, the former Beef O’Brady’s Bowl will be known as the Bitcoin St. Petersburg Bowl, thanks to a three-year sponsorship from BitPay, a bitcoin payment startup geared toward businesses.

The post-season NCAA football game, played in St. Petersburg, Florida, will be sponsored by BitPay until 2016.

As reported by CBS Sports, Beef O’Brady’s sponsored the college football game to the tune of $400,000 per year for four years. The terms of BitPay’s contract have not been disclosed.

“We are thrilled at the opportunity to work with Brett Dulaney and the team at ESPN Events to create some great interactive games where fans can use bitcoin in fun and entertaining ways,” said Tony Gallippi, co-founder and CEO of BitPay. “Together with ESPN and the city of St. Petersburg we can create a Fan Zone, concerts, merchandise, commercials, tailgates, and of course the football game with full bitcoin branding on the field and television broadcast.”