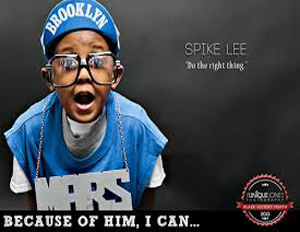 The It Factor: As the creator and founder of her self-named company, Eunique Jones Photography, this Maryland native uses her eye for photography to do more than simply snap a picture. Jones Gibson’s latest “Because of Them, We Canâ€ campaign featured a month-long series of children depicting iconic African American figures. Using the next generation as her muse to remind us of the great contributions black people have made to American politics, film, arts and entertainment, Jones’ campaign garnered attention from A-list celebrities including Oprah Winfrey, Common, Kerry Washington, Iman and Russell Simmons, just to name a few. Jones is also responsible for the “I Am Trayvon Martinâ€ campaign that went viral last year, which featured individuals dressed in the iconic hoodie apparel that the young Florida teen was wearing when he was unjustly shot and killed.

The Process: Although Jones has only been in the photography business for three years, the overwhelming recognition that her work has garnered proves that she is truly living out her passion as she credits her father for her camera obsession. “My dad always kept a camera around and took a lot of pictures and was interested in photography so naturally it rubbed off on me.â€ Her highly-acclaimed “Because of Them, We Canâ€ campaign was shot in just one day after narrowing down over 300 responses that she received from a Facebook casting call that asked parents to send in pictures of their kids. Jones said she went into the shoot with a very organized mindset, having picked the kids who she felt resembled the featured iconic figures the most and having already mapped out the looks and poses she wanted for each shot.Â  For last year’s widely recognized “I Am Trayvon Martinâ€ campaign, the Bowie State University alum said that the criteria was no way near as strict as this year’s BHM photo series as anyone from her son, to a nephew or friend could have signed up for that shoot.

The Inspiration: Jones cites both Gordon Parks and Sharon Farmer as some of the old school photographers whose careers she admire the most. From the new school she lists Derek Blanks and other everyday people who she follows on Instagram and other social networks, adding that she’s “pretty much inspired by those who are creative and think outside the box.â€

Expanding the brand: Eunique says that due to the feedbackÂ  and list of other individuals that she wants to feature as well as other kids that she wants to inspire, she has intentions of continuing the “Because of Them, We Canâ€ campaign beyond just February. “I know McDonald’s has their 365 days a year program and Tom Joyner. I would really like to do a 365-day campaign focused on Black History to inspire,â€ says Jones. “And eventually focus on kids of all nationalities and races so that it’s not restricted.â€ In addition to expanding the “Because of Them, We Canâ€ campaign, Jones also talks about plans to do a campaign on teen violence that inspires kids to stop. “If I can’t get out and speak to kids then hopefully my photos will impact them.â€

Winning Advice: For the next generation of photographers, Jones advises them not to be afraid to be innovative or go with their wildest ideas. “Don’t be afraid to grind, lose sleep and make sacrifices to learn the craft,â€ she says. “For me I haven’t had a full 8 hours of sleep in I don’t know how long and I have two kids,â€ she adds while also stressing about fighting past your fears. “Even for me with the Divine 9 I was terrified and scared out my mind to do that because I know how precious everyone treats their fraternities and sororities, but I had to go with it and until this day that’s the most popular one to go viral.â€

To learn more about Eunique Jones Photography and the “Because of Them, We Can Campaign,â€ visit her Website at EuniqueJonesPhoto.com.