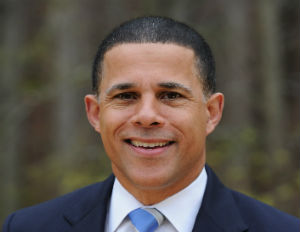 Come Nov. 4, the people of the great state of Maryland will be confronted with a big decision. Who will they choose to run their state through the next four years?

They’ve got two choices. On the one hand they’ll have the Republican, Larry Hogan, a real estate broker from Anne Arundel County; on the other, the Democrat, Anthony G. Brown, the Lieutenant Governor.

So how will the Brown administration differ from that of the current governor—Gov. Martin O’Malley? The Lt. Governor tells Black Enterprise that he gets asked that question all the time. He says he didn’t set out on this journey just to distinguish himself.

He tells us the race is really about what’s next for Maryland, saying that the key is about building on what has been accomplished by the former administration. He says, “Maryland has a strong business climate and a strong economy. One of the things that we will do in a Brown-Ulman administration, that we will establish as our first strategic goal, will be to position the Maryland business climate as the No. 1 in the nation. While we have a strong economy when we look at some of the rankings of state business climates, there are areas where Maryland needs to improve. They include our regulatory and licensing environment and our tax liability. The quality of our workforce is strong and our infrastructure is sound, but improving regulation and taxation is a priority as well as reducing the cost of energy in Maryland.”

He has a point. Maryland imports about 30% of its energy, more energy than surrounding states, a key reason why costs are high.

Still, several African American businesses owners have complained that they feel as if they are gettingÂ onlyÂ crumbs of the national pie. Brown sympathizes. He emphasizes the importance of not taking businesses for granted, and stresses the need to continue to work on attracting and retaining African American-owned businesses in the state.

“I have a proposal to strengthen our M.B.E program. We have one of the most innovative economies in the country. In cyber-security, in life sciences, event communications, logistics management, a lot of states like to tout that they have innovative economies, but Maryland was ranked No. 1 by the U.S. Chamber of Commerce for our economy in innovation and entrepreneurship. And we do that not only through our M.B.E program but through other economic development tools, like our access to capital program or our small business loan program. We also do it by providing quality higher education for future entrepreneurs and business owners – quality education at Morgan State university and our flagship at College Park.”

He believes thatÂ businesses owned by African Americans and other minorities benefit when education, the state’s M.B.E programs, and the work they do to promote small and entrepreneurial businesses are taken into consideration.

Brown’s conversation with Black Enterprise also touched on healthcare and the Affordable Care Act. Brown’s work to improve healthcare and expand coverage to people in the state, including children, is well-documented,Â though the Washington Post begs to differ. The Post says that it is “yet to see his fingerprints on any major decisions or changes at the exchange.”

Brown was asked by Gov. O’Malley to guide the federal healthcare overhaul in the state. He conceded during the primary debate that he should have insisted on being a member of the board that directly oversaw the rollout of the health exchange, which crashed on its first day.

And as we approach the month of November, the difficulties with open enrollment last year come painfully back to mind. Some supporters believe that backing Obamacare can be detrimental to his campaign. He disagrees.

“I will say that as a general matter Marylanders appreciate the efforts of health reform to expand access to care and to drive down the cost of that care. Maryland, like every state, had troubles rolling out the health benefits exchange, but I think that for us and much of the country we are beyond that challenge. As we approach our second open enrollment we will do what we did in the first—which is to meet our goals and, in fact, exceed them as we improve the technology.”