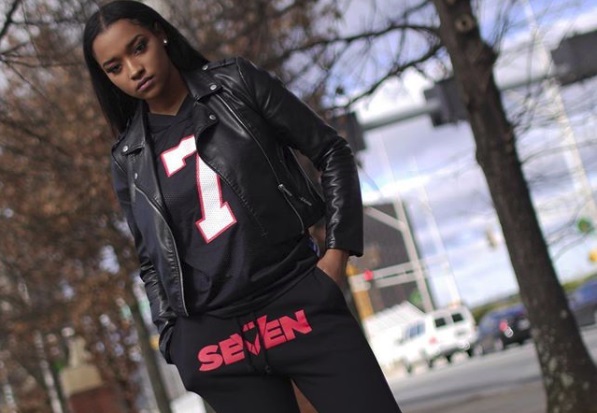 Now with a second location in Sandlain’s hometown of Detroit, Sandlain is shifting her attention to a similar but different venture; growing and expanding former NFL quarterback Mike Vick’s V7 clothing line.

“I have always been in women’s fashion so men’s fashion was a bit of a challenge for me,” says Sandlain. “Initially I focused on what Mike liked which was basic sportswear styles. You know the joggers, sweats, and shorts.”

After a bit of trial and error with V7 clothing, Sandlain hired clothing design industry veteran Somos Thompson. “He completely understands the industry, so I do not stand in the way of his design work. We put it out, let the customers respond to it, and make decisions from there.”

Organic growth is the key branding strategy behind the V7 clothing line. With an emphasis on product quality and functionality, Sandlain wants to allow the brand to speak for itself. “We create lifestyle photo shoots, and content, but are mindful of using Mike in our V7 clothing creative process so that we do not oversaturate him.”

Experiencing great success, V7 clothing is now generating at least $5,000 in daily online per day. Although the man behind the brand Mike Vick is not outwardly vocal, the brand is growing and expanding into retailers across the country. “We just closed a 15-door deal with Downtown Locker Room in the 757 and 804 area codes which encompass the Virginia Beach and Richmond areas.”

Further expanding distribution opportunities, Sandlain reached a deal with Tradition Licensing, a black-owned company based out of Richmond, Virginia, for collegiate licensing of the V7 line. Their first collegiate team will be Mike’s alma mater, Virginia Tech.