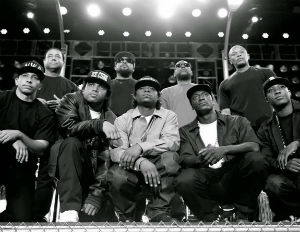 When the lyrics of “Cruisin’ Down tha Streetâ€ played during the trailer for Straight Outta Compton, I knew that every head in the movie theatre would nod to the familiar track. Images of Eazy E, Dr. Dre, and Ice Cube laying the iconic track down in the studio circa 1986 would set the vibe for the premier of the highly anticipated movie.

I’m a southern girl from the projects in Raleigh, North Carolina, but in the late ’80s, when the album Straight Outta Compton by rap group N.W.A. dropped, the album’s lyrics told the stories of what I had seen growing up in urban areas while the West Coast beats transcended regions and dialects. Even though the media coined the term “gangsta rapâ€ to describe the messages being conveyed by these street-smart rappers, N.W.A. preferred to refer to their music as “reality rap.â€ Group member O’Shea Jackson, better known as “Ice Cubeâ€ (his real-life son O’Shea Jr. portrays Ice Cube in the movie) was 19 years old when their music first hit the airwaves. When he was asked about the controversial lyrics N.W.A. used, he reflected on the lifestyle he and his band mates witnessed and labelled the group as merely “street reporters.â€

The two-and-a-half hour biopic chronicles the story of N.W.A. as a group as well as, the evolution of the friendship between Cube and aspiring DJ Andre “Dr. Dreâ€ Young (Corey Hawkins), and their relationship to a neighborhood drug dealer, Eric “Eazy-Eâ€ Wright (Jason Mitchell). We learned the details of how they turned a life of gang banging to a legitimate record label (Ruthless) for upcoming West Coast hip-hop acts. It was unforeseen that a group of “boys in the hoodâ€ would birth an original sound or that Wright (Mitchell) would emerge as the Godfather of Gangsta Rap.

Straight Outta Compton‘s director F. Gary Gray (Friday) is able to weave back and forth through N.W.A.’s live performances and recording sessions while shedding light on what really happened during the group’s scrutinized rise and its working relationship with veteran rock manager Jerry Heller. As most other movie-goers, I was very anxious to see how Suge Knight would be portrayed and if the altercation that happened while filming the trailer would change the outcome of his character on the screen. True to form, Suge Knight’s depiction was not a force to be reckoned with. During the second half, we see friction between the three N.W.A. principals over money which sends each down different paths: Cube with movie projects and a platinum solo career, Dre as a megaÂ producerÂ who, in and out of crazy partnership with Knight, helps to develop a new generation of hip-hop talent (including Snoop Dogg, Tupac, and Eminem). Â In 1995, Wright starts to succumb to the AIDS-related complications that would take his life four years later at age 31.

Gray’s directorial perspective gave us a 365 degree historical tour when during a pivotal scene, the bass line to the 1988 hit “F—k tha Policeâ€ dropped, and the movie’s audience yelled in excitement. I couldn’t help but to get chills as just this past weekend two more lives were taken in Ferguson, Missouri, seemingly due to police brutality. The song made the perfect soundtrack to summarize the #BlackLivesMatter movement.

The movie closes with Dr. Dre walking out of Death Row Records for the last time and it leaves the audience more than satisfied with the biopic but even more intrigued by its underlying story. F. Gary Gray talks about his desire to give the audience more of what Straight Outta Compton offered its viewers, “Everything that happened post-N.W.A is gravy, but I think we picked the right things (to include). There was so much more I wanted to put in it, but you can’t have a damn four-hour movie, it’s just not reasonable.â€ Straight Outta Compton comes out worldwide Aug. 14, 2015.