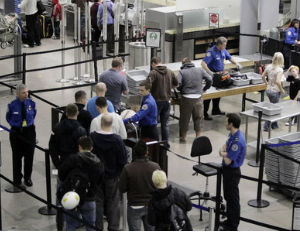 Newark Airport TSA employees failed a staged security test after letting a man with a fake bomb get through security.

A special operations team set up at shop at Newark Liberty International Airport February 25, after 71 security staff members “were either fired of disciplined because of major security lapses and theft of property,â€ reports TheUrbanDaily.com.

Four people pretended to go through TSA’s B1 checkpoint, as travelers, where Jet Blue, American Airlines and Delta are housed.

According to TheUrbanDaily.com, “‘the bomber’ made it through the metal detector unnoticed, and was even pulled aside for a physical pat downâ€–being cleared to board the plane with “explosivesâ€ tucked away. Only one of the four people to test the checkpoint were stopped for “hiding her ‘explosive’ inside a child’s doll. Rumor has it, the person was only stopped because she looked “overtly suspicious.â€

Soon after that test concluded, the special operations team conducted another checkpoint experiment but has not released any of the results.

“TSA regularly conducts covert testing of security layers. Regardless of the tests’ outcome, TSA officers are provided with immediate on-the-spot feedback so they receive the maximum training value that the drills offer,â€ TSA stated. “Due to the security-sensitive nature of the tests, TSA does not publicly share details about how they are conducted, what specifically is tested or the outcomes.â€