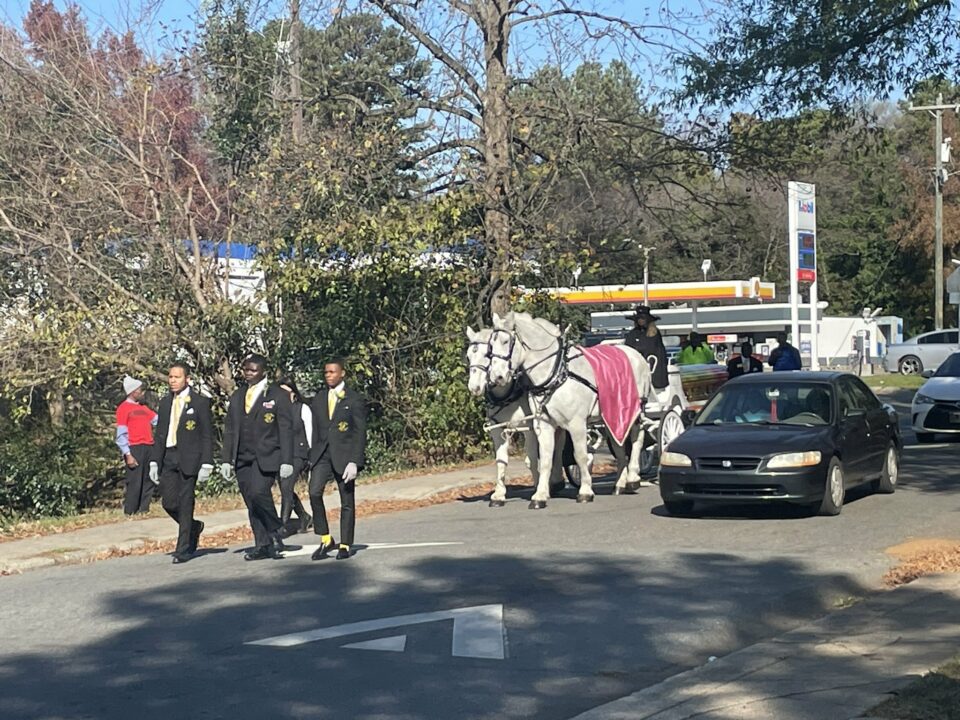 The family of Shanquella Robinson held funeral services for the 25-year-old in Charlotte, North Carolina over the weekend.

According to WBTV, Robinson’s homegoing service was held at the Macedonia Baptist Church on Nov. 19. Her casket was carried by a white horse-drawn carriage.

Robinson was beaten to death after she went on vacation to San Jose del Cabo, Mexico with several people who she thought were her friends. Robinson died from blunt-force trauma to her head.

Video of one of the women on the trip with Robsinson, Daejhanae Jackson, caught Jackson repeatedly hitting and kicking a nude Robinson in a bedroom of the villa the group rented. Robinson did not fight back as she appeared to try to get away. The man recording the video was heard asking Robinson to fight back. She was found dead on Oct. 29 by police inside the villa, one day after she arrived.

The people on vacation with Robinson were later identified as Jackson, Alysse Hyatt, Wenter Donovan, Khalil Cooke, Malik Dyer and Nazeer Wiggins. One of the friends called her parents, Bernard Robinson and Salamondra Robinson, and lied about the cause of death. The friend said she died from alcohol poisoning, but her parents later learned that Robinson died from a cracked spine and broken neck. The FBI has opened an investigation into Robinson’s death.

The church was crowded with those who wanted to pay their respects to Robinson, including activist Tamika Mallory. Mallory said that she wants to ensure the truth is uncovered and that those responsible for Robinson’s death are held accountable.

“We came to ensure there are enough people putting pressure on the entire system to do what is necessary to get justice for this woman,” she said.

“Losing a loved one in the heinous way in which has happened to Shanquella, there will probably never be peace for them. But there cannot just be an open situation. It has to be closed with truth and it has to be that there is accountability for those that are responsible for her death.”

Mr. Robinson told TMZ in a heartbreaking video that he thinks his daughter was asleep when she was attacked.

“They attacked her ma’am,” he said.

“It seemed like, my daughter was asleep, ma’am… For all of them to be in that room…. And she’s naked, ma’am,” his voice cracked. “For a father, to see that video, ma’am, my daughter’s not a fighter, ma’am.”

“For them to do what they did, ma’am, it seemed like a plot.”

“They just put a hole in my heart, ma’am. That was my only child. I’m just heartbroken, ma’am.”

Mr. Robinson also said that he will never be a grandfather or walk his daughter down the aisle. He added that he hopes those responsible serve life sentences in prison in Mexico, where the crime was committed.