Watching President Barack Obama deliver his farewell address live and in person at the McCormick Place Convention Center Tuesday night was bittersweet–more bitter than sweet. Although I was ecstatic to witness this epic moment in history, the reality of the end of the Obama era began to sink in. In just a couple of days, the eloquence, class, and diplomacy that the Obamas brought to the White House will be replaced by a crass, offensive, and extremely petty reality TV star. To make matters worse, President-elect Donald Trump plans to usher into the White House a team of wealthy business owners, most with no political experience, some with ties to Russia, and others with a track record of racism. In addition, the end of the Obama administration could potentially mean the end of affordable healthcare, diplomatic foreign policies, and our country’s open door policy to immigrants.

Nonetheless, the energy inside of McCormick Place was high and spirited as we waited for Obama to address the nation for the last time as president. Thousands of Chicagoans came out to welcome Obama back to his adopted home while people traveled from all around the country to hear him lay out his legacy.

While there, I spoke with Mike Muse, who served on Obama’s National Finance Committee and National Advisory Board and was named My Brother’s Keeper Millennial Entrepreneur Champion. “How could I not be here to wish this man farewell?” he told BE.

He added that the president chose to deliver his farewell address in Chicago rather than the White HouseÂ as a way to show his gratitude for the city that made him.

As the night progressed, the mood remained optimistic and hopeful, two characteristics that define Obama as aÂ leader. However, I, personally, felt a mixture of emotions. At times, I was gleeful. Other times, I couldn’t help but think of the dim reality that is to come.

At one point during his speech, I heard people chanting “four more years,” to which Obama, responded, “No, I can’t do that.” Some people told me at the convention that they wish Obama could run for a third term. I agree. However, CNN political commentator Bakari Seller made a good point–maybe it’s time we give the Obamas a break. They dedicated the last eight years of their lives to serving our nation. Meanwhile, the president endured anÂ unprecedented level of oppositionÂ and scrutiny.

CNN political commentator @Bakari_Sellers tells BE what he would like to see up next from The Obamas! #FarewellObama pic.twitter.com/zL19TVI5pS

My favorite part of Obama’s speech came when he addressed his wife; professing his love and gratitude for “the girl of the South Side” he married 25 years ago while tears streamed down his cheeks. Â She mouthed, “I love you” in response, demonstrating the strength, beauty, and resilience of black love. 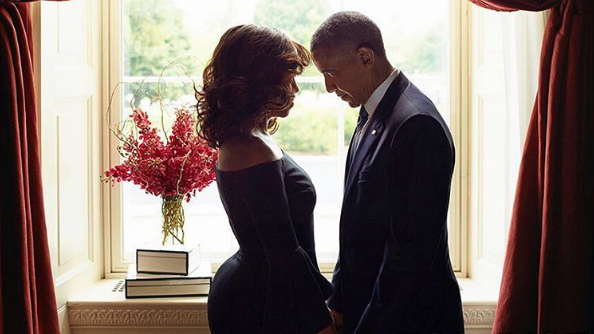 Obama also delivered a message of hope and optimism, which actor and comedian Chris Tucker told meÂ resonated with him most.

I also spoke to Rev. Jesse Jackson, who was proud of the work that Obama had done.

“The automotive business has bounced back. We connected with Cuba. We’ve [addressed] climate change in a very scientific way with a global coalition. We’ve gotten Iran off of a nuclear trajectory. We have a lot of unfinished business, but we’re better off,” said the civil rights leader.

He added that the president would have gotten much more done such as building a high-speed rail system and adding even more jobs to the economyÂ if it wasn’t for Republican obstructionism. “Their job was to destroy him,” he said. “They failed, he succeeded.”