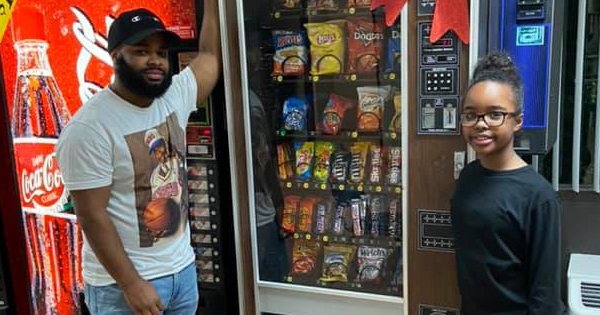 A Pennsylvania father decided to give his daughter a gift that will keep on giving. Instead of toys, video games, or clothes, Reco Oxendine gifted his daughter a vending machine.

“I want her to be a boss,” the 28-year old father told Atlanta Black Star. “I want her to understand (the) value of being a business owner at a young age. So, when it comes to her growing up… and she has to make decisions about how she can earn money, she knows that a job isn’t the only way.”

Oxendine wants to educate his 10-year-old daughter on business, saving, and wealth-generation. He also wants to expand these lessons to other children, which is the mission behind his new venture Next Uplifted, a platform that teaches financial literacy to children through applied skills.

“I looked around my community, and I saw where we stand as black people in regards to wealth,” said Oxendine. “I saw that, and I was trying to find a way that I can personally affect my community. So I decided to teach financial literacy to kids, and I’ve just been studying ideas on how to create wealth.

Oxendine’s entrepreneurial exploits with his daughter started back in 2016 when they started a candy business in the community called “Candy Lovers” with other children. They would go to barbershops, beauty salons, and sporting events, selling candy. They would also go door-to-door throughout the community.

“She was making executive decisions from day one, saying she could run it better than me,” Oxendine, 28, told Atlanta Black Star. “It just put her in a business mindset.”

Oxendine’s daughter was very excited to receive the vending machine as a gift. Vending machines can cost anywhere from $1,500 to $3,000 depending on the features, according to DiscountVending.com.

“When we were selling candy in the local salons and barbershops, I built trust with the people who worked there,” Oxendine explained. “So, when it came time to actually sell them on our vending machine [idea], it was an easy conversation.”