Having a social media page certainly has its perks, but for some it seems to pay more to shut it all down.

Paul Baier, VP of a Massachusetts energy company and father to his daughter Rachel Baier, has written up a $200 contractual agreement that states his daughter will give up her Facebook account for four-and-a-half months in exchange for money.

Stemmed from Rachel’s realization that “Facebook is a distraction and a waste of time sometimes,â€ Baier agreed to pay his daughter $200, to be given in installments–the first $50 paid on April 26 and the final $250 paid June 26–to steer clear of her social media page.

After acquiring her full no-Facebook-allowed payment, Rachel says, “I plan to use the money for the following purposes: stuff.â€

Take a look at Rachel Baier’s binding contract below. 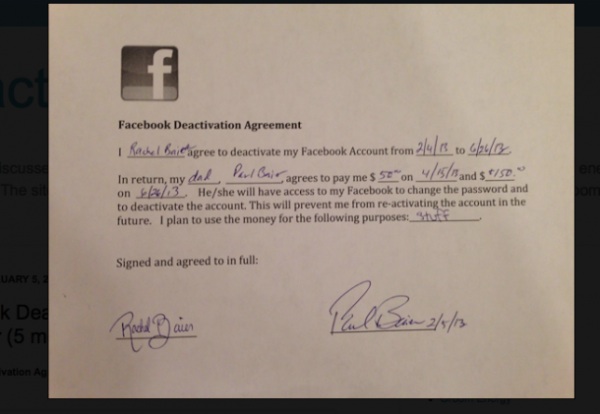