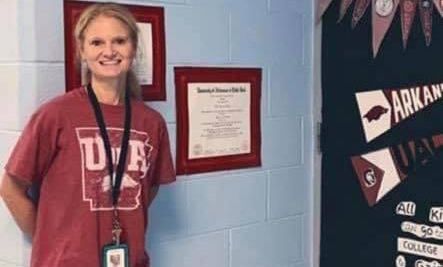 A photo of Karla Lasiter, the teacher accused of having a 5-year-old student unclog a toilet with his hands (Image: Twitter)

Allegedly, the Federal Bureau of Investigation (FBI) warned Karla Lasiter to “leave town” due to death threats, according to Facebook user Mark Cannon.

Cannon took to Facebook to update his followers to tell them that someone associated with Lassiter had contacted him and informed him that, due to death threats and bad reviews, the FBI advised her to leave town until things died down.

“They’ve been forced to shut it down because of all the death threats and the phone calls. And the FBI has gotten involved and told her it’s best to just go ahead and shut the business down and leave town.”

A petition has been started on Change.org calling the “firing and loss of license to teach” for the white teacher, Lasiter, who made the 5-year-old Black boy remove feces from a school toilet.

“Karla Lasiter, a teacher at Crystal Hill elementary in North Little Rock Arkansas, forced a child to clean out a toilet containing feces with his bare hands. Whether racially motivated or not it is clear this was done to humiliate the child, something a teacher should never aim for. Further she has put this childs health at risk, as this act is extremely unsanitary. She is currently under investigation while on administrative leave. What is being investigated is not known as she admitted to the act both to the family of the child and the principal. This cannot go unpunished. This petition is to call for the firing of Karla Lasiter and further the loss of license to teach in the state of Arkansas. Please feel free to research further before signing but I implore you please sign. If she is to go unpunished it will set back the fight against teachers and their abuse of power in schools against students, especially POC students. Thank you.”