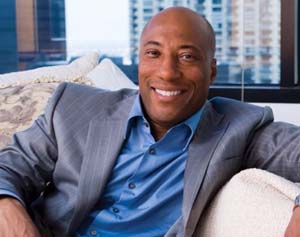 According to reports, both the Federal Communications Commission and Charter Communications are being sued for $10 billion in federal court by Byron Allen’s Entertainment Studios and the National Association of African-American Owned Media (NAAAOM) for “racial discrimination in contracting for television channel carriage.â€

“President Obama and the Democratic Party have completely excluded the African-American community when it comes to economic inclusion,â€ Allen said in a statement Wednesday. “Everyone talks about diversity, but diversity in Hollywood and the media starts with ownership. African-Americans don’t need handouts and donations; we can hire ourselves if white corporate America does business with us in a fair and equitable way.â€

The suit continues with allegations of civil rights violations andÂ is the second such suit that Allen and NAAAOM have in the courts against the telecommunications giants right now.

“A driving purpose of the Federal Communications Act and the First Amendment is to ensure the widest possible dissemination of information from diverse sources,â€ the lawsuit indicates. “Yet the FCC has done nothing to protect the voices of African-American-owned media companies in the face of increased media consolidation,â€ it adds. “Instead, the FCC works hand-in-hand with these merging television distribution companies to enable and facilitate their Civil Rights violations. The FCC’s apparent standard operating procedure is to obtain and accept sham diversity commitments from merger applicants, in excess of its statutory duties.â€

“At the direction of its President and Chief Executive Officer, Tom Rutledge, Defendant Charter Communications has intentionally excluded African-American-owned media companies, including Plaintiff Entertainment Studios, from contracting for carriage on its television distribution platform,â€ the complaint continues. “Rutledge did this himself and by and through his subordinates, including Allan Singer, Senior Vice President of Programming at Charter,â€ the 27-page filing notes, calling Rutledge, “a blatant racist.â€

Allen and NAAAOM Â have anotherÂ $20 billion lawsuit against Comcast and Time Warner Cable, originally filed last year which was dismissed by U.S. District Judge Terry Hatter Jr. and then revived by the same judge. Allen and NAAAOM filed an amended complaint, which Comcast asked to be dismissed.

That lawsuit is still being evaluated before the courts, Time Warner Cable was dismissed as a defendant from the case last fall, and its $55 billion merger with Comcast has stalled. Al Sharpton and the National Action Network, as well as the NAACP and the Urban League were dropped from the ongoing suit late last year.