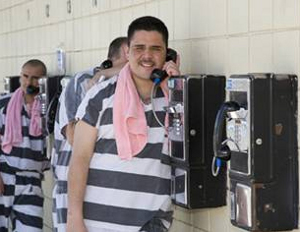 When a family member or loved one becomes incarnated, families often face a 2nd punishment in the form of extremely high phone charges to communicate with them. Calls from inmates to family members are often 15 times higher than regular phone calls. Additionally, landlines are needed to accept collect calls, adding an additional monthly expense to families who tend to be poor or struggling. The Federal Communications Commission wants to change that.

The government agency is seeking public comment about inmate calling services, which unlike regular phone service is a near “monopoly,” according to the FCC’s recently issued Notice of Proposed Rulemaking. Currently, the FCC does not regulate inmate telephone systems, rather Departments of Correction enter into contracts with private companies which set phone rates with no governmental oversight. If the FCC were to regulate this industry, other companies would be allowed to compete and offer phone services, bringing rates down.

The case that brought this issue to the FCC’s attention was in 2003. Martha Wright, a Washington, D.C. resident, was paying about $200 a month for one 15-minute phone call a week to her incarnated grandson. Deeming these outrageous rates, civil rights groups filed a class-action lawsuit on her behalf. The case was dismissed by a judge who instructed Wright to contact the FCC.

“In the nine years since this case, “tens of thousands of consumersâ€ have contacted the commission, written, emailed, and yes, phoned the commission, pleading for relief on interstate long distance rates from correctional facilities,” said FCC commissioner Mignon L. Clyburn.

The telephone, said Clyburn, in her statement, “is a crucial instrument for the incarcerated, and those who care about them, because voice calling is often the only communications option available. Most inmates along with their families and friends are low-income, so in-person visits due to distance and expense are infrequent.”

Mignon says high rates for prison phone calls affect everyone, even those without loved ones in prison because “Studies … show that those released are less likely to re-offend if they are able to maintain relationships with their loved ones while they are in prison.â€

The FCC will receive public comments for the next two months on its proposal.