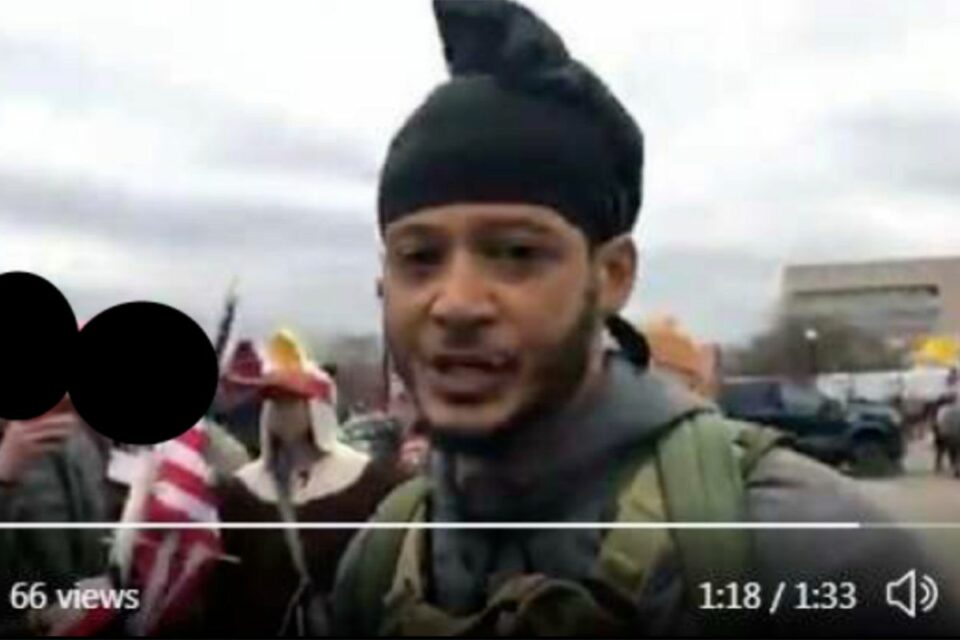 Federal law enforcement has issued the first arrest of a Black man associated with the Capitol Riots on January 6.

Uliyahu Hayah was arrested on Monday and accused of assaulting a police officer inside the Capitol building, WJLA reported. The 45-year-old Silver Spring, MD, resident was charged with assaulting, resisting, or impeding certain officers as well as engaging in physical violence in a restricted building or grounds and civil disorder.

A video mentioned in court documents shows Hayah entering the U.S. Capitol building wearing a camouflage backpack, a black headscarf, and a gas mask while carrying an American flag. Hayah was within the group of angry rioters who stormed against the U.S. Capitol Police officers line toward the House chamber.

Hayah was seen making his way from the Senate wing toward the House of Representatives chamber and near the Speaker’s Lobby around the same time rioter Ashlii Babbitt was fatally shot by a Capitol Police officer.

He was also seen on video engaging in a confrontation after the rioters were told to leave the Capitol building. He is accused of pushing a Metropolitan Police Department officer 10 feet into the crowd before leaving the building by 2:57 p.m.

He was seen bragging about his actions in the insurrection in a video shared on Twitter.

“We pushed all the way through. They couldn’t stop us,” Hayah can be seen saying.

A video shared on Twitter, and turned into a blues song, shows the moment Hayah assaulted a Capitol police officer.

Now Jan 6 case of US v. Uliyahu Hayah, continued from last week when Inner City Press reported on (and sang about) the case and previous Maryland case. Now Magistrate Faruqui starting up – but kicking the can down the road to Sept 10 at 1 pm. He remains detained. https://t.co/0xF72YOlVU

“Hayah joined a physical confrontation as law enforcement tried to escort rioters out of the building,” the Department of Justice said in a press release. “As alleged, he put his hands on a Metropolitan Police Department (MPD) officer and pushed the officer approximately 10 feet into the crowd.”

Hayah appeared in court last Friday and remains in police custody until his next appearance on Sept. 10, News One reported. He is one of the first Black people to be arrested and charged for his alleged involvement in the Capitol riots.