The Fellowship Initiative Is Shattering the Status Quo 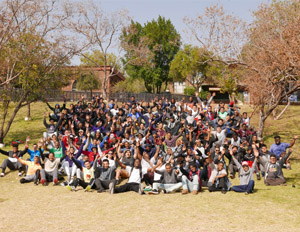 TFI with The Experiment in South Africa

The Fellowship Initiative sponsored by JPMorgan Chase is a comprehensive mentoring and enrichment program that exposes young men of color to the skills, experiences, and knowledge they’ll need to compete globally. One hundred-twenty African American and Latino high school students from New York City, Chicago, and Los Angeles (40 from each city) are currently participating.

One exciting part of TFI is a fully funded immersive experience in South Africa, where the young men stay for two and a half weeks developing leadership skills, resilience, and social skills. That part of the program is designed and run by The Experiment in International Living.

Aaron Morehouse, PhD, The Experiment’s executive director and the vice president of global development andÂ exchange at World Learning, the nonprofit that The ExperimentÂ is part of, told me JPMorgan approached The ExperimentÂ to develop TFI’s overseas program because they knew of their work.Â “We have the greatest diversity–racial, ethnic, socio-economic, geographic–of any of the study abroad programs,â€ Morehouse says.

Imani Farley, senior associate at JPMorgan Chase, heads up TFI, which partners with community-based organizations to recruit boys who’ve completed their freshman year of high school.Â “Students are selected through an application and interview process,â€ she says. “Parents are interviewed as well.â€

Farley explains that the parents must commit to supporting their sons. They’ll be the ones making sure they’re on time for the Saturday activities, which take place three Saturdays of the month starting at 8:30 a.m. and ending at 4:30 p.m.Â “In New York, students can take the subway. But in L.A. and Chicago students need to be driven, so parents have to be willing to get them there on time.â€

Excelling When Others Believe in You

Students are C+ to B+ students. “Their issues typically stem from not having the proper support from their high school, not knowing how to ask for help, not having male mentors or role models,â€ Farley says. “The middle-of-the-road student is really successful after they get extra love, extra support, extra attention, and once they begin to believe that they can be successful because others believe in them.â€

Steven Pierre, a high school senior from Brooklyn, New York, and a TFI participant, says the trip to South Africa represented a lot of firsts for him, including his first time out of the country and the first time he went ziplining.Â He called the trip “enlightening,â€ and said getting to know the boys from Chicago and Los Angeles created a “mini brotherhood.â€

Arthur Wells, a high school senior from Chicago, credits TFI with broadening his horizons. He said the best part of the South Africa trip was visiting Robben Island, where Nelson Mandela had been held prisoner, and visiting with locals. Wells plans to pursue a master’s degree in civil engineering.

For more about JPMorgan’s Fellowship Initiative, visit its website. To learn more about the South Africa component, go here, or watch the video below.