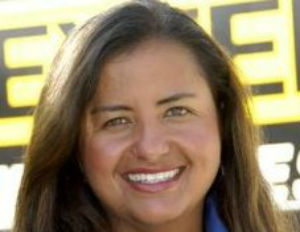 Alba Colon grew up with a love for science and dreams of becoming the first Latina astronaut to venture into space according to CNN Money, but after joining the Society of Automotive Engineers while in college, she decided to switch gears–eventually becoming one of the most respected female NASCAR engineers in the industry.

Alba is a Latina woman and considered a double-minority in the racing world, but she hasn’t let the industry’s white-male dominated numbers stop her from achieving or setting new goals.

CNN Money reports that Colon served as chief engineer for major NASCAR drivers, Jimmie Johnson, Danica Patrick, and Dale Earnhardt Jr. She currently works as lead engineer for the NASCAR Sprint Cup Series for Team Chevrolet, where she manages the technical resources that GM provides for all of its NASCAR Sprint Cup Race Teams.

CNN Money says , the Â Puerto Rico Â native uses her platform to motivate others by speaking at universities, Hispanic initiatives, and diversity programs where she encourages youth to pursue a college education and to never give up.

“Many of these students, the examples they have at home is parents that didn’t finish school,” Colon said to CNN Money. “So I want to show them, hey, I am a Hispanic kid and I worked hard to get where I am. You can be like me. You don’t have to stop when you finish high school. You can keep going.”