Power Moves: Why We Must Fight For Media Diversity 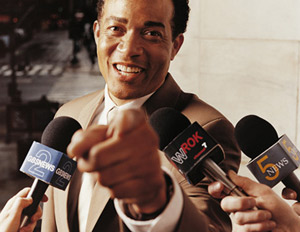 From broadcast news to animated television shows, the media industry continues to flunk out when it comes to diversity. I recently attended two events that further made it clear why we all must turn up the volume to ensure diverse voices can be heard on every platform imaginable.

I went to the invitation-only Emerging Voices in Media reception, held during White House Correspondents Dinner weekend and hosted by actress Rosario Dawson, Maria Teresa Kumar from Voto Latino, a leading non-partisan youth civic engagement outfit, and David Sutphen of the Brunswick Group, a strategic communications firm. The soiree on the rooftop of the elegant Hays-Adams hotel with its breath-taking, panoramic view of Washington, D.C. brought together more than 300 journalists, policymakers, business leaders and artists including White House Domestic Policy Adviser Melody Barnes, U.S. Trade Representative Ron Kirk, PepsiCo Chief Engagement Officer Chair Frank Cooper and MSNBC’s Tamron Hall for champagne, Kobe beef sliders and talk of politics, business and diversity. In saluting those committed to greater inclusion in media, Kumar said: “Together, we need to change the face of newsrooms in front of the camera, behind the camera and in the executive suite.â€

The Television Newsroom Management Diversity Census released last July confirms her assertion. Although non-Whites make up more than one-third of the US population, the study of 151 stations found that people of color comprise only 12.6% of newsroom managers. It further states that out of 815 executive producers, assignment managers, managing editors, assistant news directors, news directors and general managers at the ABC, CBS, Cox, FOX, Gannett, Hearst Argyle, Media General, Meredith, NBC and Tribune stations, 713 (87.9%) are White; 64 (7.8%) are African American; 24 (3%) are Latino; 13 (1.6%) are Asian and only 1 is Native American. Management teams at 82 of the stations are all White.

Three years into the first term of the first African American president, representation on the airwaves is basically unchanged. Gwen Ifill of PBS’ Washington Week remains the only African American anchor of a prime-time political news program and Black and Latino hosts are absent from the Sunday morning line-up of political and business news programs. With the exception of the occasional appearance of a minority pundit or political official, the only consistent appearances of Blacks on national Sunday morning public affairs programs are Roland Martin of TV-One’s Washington Watch and Caroline V. Clarke and Marc Lamont Hill, hosts of our two nationally-syndicated television programs, Black Enterprise Business Report and Our World with Black Enterprise, respectively. (The two BLACK ENTERPRISE programs also air on TV-One as well). It’s true that mainstream shows regularly feature Pulitzer Prize-winning journalists like The Washington Post‘s Eugene Robinson and Chicago Tribune‘s Clarence Page but clearly there’s enough outstanding minority talent to carry a prime-time or Sunday morning show. Even a scandal-plagued ex-politician can gain a slot before a minority veteran journalist or pundit.

Kathy Y. Times, president of the National Association of Black Journalists, said at the time of the census: “It is disheartening that so many of the companies have no Black news director in some of the most diverse cities in America. It’s time for African American viewers to reconsider their support of media companies that do not appreciate or make diversity a priority.â€

Efforts to diversify media must reach beyond broadcast news though. The second event I attended was a powerfully uplifting memorial service. I was one of the speakers who paid tribute to the late Dwayne McDuffie, a pioneer of comic books and animation, as well as my long-time friend and business partner at Milestone Media Inc., which became the largest Black-owned comic book company in the 1990s. Besides creating a universe of multicultural superheroes featured as part of our imprint, Dwayne was best known for his work as writer and story editor of the Static Shock animated series based on our most popular character. The adventures of a geeky teenager who has electromagnetic powers became the first cartoon focused on a Black superhero. Dwayne also wrote Justice League Unlimited and Ben-10: Ultimate Alien series and the recently-release All-Star Superman movie. Due to the dearth of Black writers, I was told that Dwayne would joke that he “represented the Black caucus in animation.â€ Until his death, Dwayne was a powerful advocate for industry-wide diversity but at times paid the price for being vocal.

Reginald Hudlin, veteran director of Boomerang and House Party, served as moderator for the ceremony that packed the theater of the Academy of Television Arts & Sciences in North Hollywood. After the event, I had an opportunity to talk with him about the current state in Hollywood, reminding him of the renaissance of Black filmmakers he was a part of 20 years ago. Why did the movement lack staying power? “The doors are just not open,â€ he said. “We are going to have to make our own opportunities.â€

It comes as no surprise that not one media company can be found among the BLACK ENTERPRISE 40 Best Companies for Diversity. There are no Blacks that can green light a film at a major Hollywood studio and very few minorities with any influence at mainstream television networks, newspapers, magazines and Websites. That means in 21st Century America the filter for the majority of views and images continues to be controlled by White males.

Although I touched on two media segments, it is up to all of us to present, protect and promote the progression of diverse perspectives and images across all platforms. It requires the adoption of a multi-pronged approach. We must embrace groups like Voto Latino that continue to hold forums to place a spotlight on these imbalances in our newsrooms. We must stand vigilant with organizations such as the NABJ that advocate minority consumers support of media outfits that fully demonstrate across-the-board inclusion. We must follow Hudlin’s lead of entrepreneurship, creating vehicles and developing our own distribution systems. And we must use our power and resources as individual and institutional investors.

Past actions can be a valuable guide for future advocacy. More than a decade ago, then-NAACP CEO Kweisi Mfume bought shares of News Corp., Time Warner, Disney and CBS, among other media companies, to push for greater diversity in network television. By doing so, he was able to obtain internal documents on hiring practices and offer his views at shareholders’ meetings. The result: the networks began to diversify their programming. And at the time one of those new shows just happened to feature a teenage superhero in a cartoon called Static Shock.