In 'A Fighting Chance', Olympic hopefuls get a shot at medal 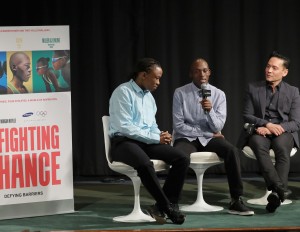 Many come with the hopes and dreams of not only a nation, but also the livelihood of their communities and families. This week, Samsung Electronics and Academy Award-winning filmmakerÂ Morgan NevilleÂ (20 Feet From Stardom, Best of Enemies) premiered A Fighting ChanceÂ during theÂ 2016 Tribeca Film Festival.

The insightful documentary short provides an intimate look into the lives of four, inspiring Olympic hopefuls from small, some unfamiliar countries, as they overcome significant challenges to compete in the 2016 Games.

The filmÂ follows Tsepo Mathibelle (Marathon) from Lesotho; Miller Pata and Linline Matauatu (Beach Volleyball) from Vanuatu; and Yenebier GuillÃ©n Benitez (Boxing, 75kg) from the Dominican Republic. It highlights that rare combination in those who are considered “the underdogâ€–uncompromising passion and willpower to overcome financial, emotional, and physical barriers as they strive to represent their nations this summer.

“One of the things that’s great about the Olympic Games is that it’s a place where everybody gets to share the stage, but some of these countries and athletes don’t have the proper resources and are faced with so many challenges,” said Neville. “These stories are not just about competing for glory, but a better future.â€

Enter Samsung. The tech giant provided the athletes with both financial and technological support from watches, phones, access to data–all designed to enable a better self-coaching environment. Mathibelle says, “This film has helped me in ways I can’t begin to describe.

My running has greatly improved with Samsung’s engagement. I am proud to show the world the spirit and will that the people of Lesotho have.â€

According to Samsung, democratizing technology to lower barriers for access is essential to this partnership. Benitez says that these resources have not only helped her keep in touch with her family, a major source of inspiration, but also her training. Benitez comes from a long line of boxers, and emphasizes that it’s important for her to be an inspiration to female athletes in her country.

“I can also now track my training better and connect with my coach, using Samsung technology to review and improve my technique. These may seem like small things, but they are big to me and can make all the difference.”

Want to learn more about these athletes and their journey? Watch the entire film of A Fighting ChanceÂ on Vimeo.