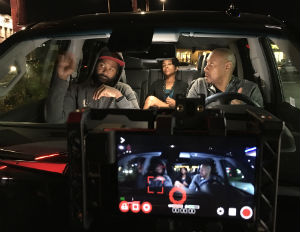 These days we hear it often–mobile technology is changing the face of independent production. That point is being proven with critically acclaimed indie hits like Tangerine, shot on the iPhone 5s, or more recently, 9 RidesÂ the latest feature from independent filmmaker and technology advocate Matthew Cherry.

Shot entirely on the iPhone 6s, the film made its premiere at SXSW.

We recently sat down with Cherry to get some insight into the vision behind the film and his views on leveraging technology for creatives.

What inspired you to make this film?

It was a character study. I take Uber a lot in LA. It’s a weird, but cool setting for a film because you’re able to add a random mix of people, and through the lead’s interactions with strangers we reveal a part of his character that needs to be addressed by end of movie.

We used improvisation the whole movie; we didn’t have a full script, but I wrote a 20-page outline. My job as writer/director was to make sure the dialogue went along a unified front, but they had total freedom to say whatever felt natural.

What was your motivation to shootÂ on the iPhone?

I’m tech savvy, and very aware of new cameras coming out, but it was always on my mind to shoot something on the iPhone because it’s a readily accessible camera. Something I have on me all day, every day. We didn’t have a huge budget and we needed something we could shoot on that didn’t require a large crew.

The fact that the entire film took place in a car allowed us to shoot how we needed to shoot quickly without a lot of extra variables you would need with another camera.Â The DP and I would sit in the car, operating. For the most part, we had the cameras on suction cups outside the car.

We set the cameras up, and I’d lay in the third back seat (we shot in a Yukon XL). My sound mixer would lie down in the trunk. We treated every ride like a real ride. He’d go pick the character up, they’d get in and he’d take them to a real destination.

They had 5-10 minutes to fill in the time with dialogue. We weeded out what we wanted to reveal.

The thing about filmmaking is that it’s a very expensive business.Â It’s really hard to take gambles especially with hundreds of thousands of dollars, upwards to millions depending on your project. It’s hard to be the first guy to pull the trigger and be the guinea pig because if it doesn’t work you’ve wasted someone’s money.

A film premiered at Sundance called Tangerine. It got a lot of love and was shot on the iPhone 5s I believe. It was really inspiring and I thought it would be cool as a filmmaker of color to one day try to shoot a movie on an iPhone as well.

We knew the new 6s was coming out and that it was going to shoot 4K. 4K resolution is a huge deal for filmmakers because it’s twice the resolution. For me, it was important to be one of the first to do it because typically in this game you’re either the first or the best–either the critically acclaimed darling or you’re first.

Hopefully, being the first to the table shooting a project like this elevated our profile, but it was mostly out of necessity.

Check back for Part 2 where Cherry shares more about his process and the importance ofÂ leveling the playing field through mobile technology.