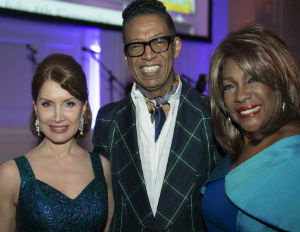 The event was hosted by none other than former Supreme Mary Wilson, and top chef and entrepreneur Marcus Samuelsson was also among who’s who celebrating the special occasion. Fashion icon Vera Wang and former Olympians including figure skating gold medalists Evan Lysacek and Dancing with the Stars Mirror Ball Champion Kristi Yamaguchi.Â  Law and Order’s Tamara Tunie, who serves as chair emerita on figure skating on Harlem’s board, was also among the top industry leaders in the audience.

“This evening brings together New Yorkers who believe in the importance of empowering girls to become strong leaders through a combination of sports, leadership, training, and education,â€ says Figure Skating in Harlem founder and 2014 CNN hero, Sharon Cohen.

About 20 years ago Cohen, a former figure skater, had a chance encounter with a group of East Harlem, New York girls who wanted to learn how to ice skate. They had recently attended skating clinics conducted by Yale and Harvard and wanted to go further.Â The girls’ passion inspired Cohen to find a way to teach them more about ice skating and inspired her to find a way to help them live better lives.Â  The result:Â  Figure Skating in Harlem, a nonprofit Cohen founded in 1997.

There is a lot more to the program than learning how to ice skate, although that is the draw. In addition to a safe and supportive learning environment, Cohen realized that she needed to make the girls financially literate if she truly wanted them to thrive. The girls have a financial education curriculum that includes topics like debt, budgeting, and investing. In addition, it is deeply ingrained in them that they must understand money if they are to truly thrive in life.

“Teaching our girls about money as a tool is essential. We want them to learn positive habits at an early age so they can harness their earning potential and be smart consumers,â€ Cohen adds.

Sandra Williams,18, says, “I learned about the importance of credit scores for the first time.â€ A lesson Cohen and others hope will help Sandra and the other girls of Figure Skating in Harlem live better lives.

In addition, two to three afternoons a week, the girls have a rigorous after-school curriculum, where they learn STEM, communications, writing and skating history.Â  More than 1,000 girls have completed the program, which is open to students ranging from Kindergarten to 12th grade.

“One hundred percent of all college-age Figure Skating in Harlem students are enrolled in university, and 85% are in four-year colleges.Â Fifteen percent are in two-year colleges,â€ Cohen says.Â  “Our students experience physical, emotional, and intellectual growth in a safe and supportive environment.”