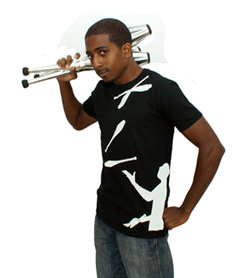 Paris Goudie was just 12 years old when the Big Apple Circus outreach program came to his Harlem, NY middle school. Entranced by the skillful and energetic teachers, Paris tried his hand at juggling and realized he was a natural. He quickly racked up an impressive rÃ©sumÃ©, including local events, UniverSoul Circus, and more work with Big Apple. “They put me in a spot at Lincoln Center when I was 12, then I got several TV spots through their push,â€ says Paris.

With a slew of publicity and professional gigs at a young age, Paris’ future in juggling was looking bright–that is, until his life quite literally took a major curve. “I had scoliosis,â€ he explains. “I had to get surgery to push rods in my spine. So I took three years off of juggling.â€

Putting his dreams aside, Paris got his degree in management, and followed the straight and narrow path, landing a job at the well-known payroll software company ADP as an implementation specialist. He was making a good living in an ailing economy, and excelled at his job, boasting a 98% client satisfaction rate. But still, Paris felt something was missing from his life. “My true self started to come out,â€ he admits. “It came down to what I really wanted to do. There’s a difference between what you can do, and what you should do. I was good at my job at ADP, but I wasn’t doing what I felt I was truly best at.â€

When Paris once again began frequenting juggling conventions after nearly a decade-long hiatus, people were shocked to see that a performer with his skill level wasn’t a professional. “Everyone was like, ‘Who’s the Black guy?’â€ he laughs. So two years into his successful career (and fully healed from surgery), Paris made the decision to quit his job and return to center stage.

But switching careers, much like juggling, can be tricky. Paris warns those who are about to make a major career switch to be careful not to drop the ball. “Make sure you have your stuff in order,â€ he says. “If you want to quit your job to, say, become a barber, don’t quit, then look for certification, and clientele, and setting up a shop or a chair. Take the time and make sure that your venture can start immediately.â€

Luckily, with Paris’ prior relationship with Big Apple Circus, he was able to secure a teaching job in a Big Apple program similar to that which introduced him to juggling as a youngster. That’s not to say that making such a drastic career change didn’t come with initial setbacks. Paris admits that while he currently makes a salary comparable to his prior job, he did take a pay cut his first year. “But I was prepared for that–I had money saved, so I didn’t have to move into my mom’s basement,â€ he laughs.

While he now enjoys the numerous tax write-offs that come along with being self-employed, Paris readily admits that he’s learned there are some perks that only corporate America can provide. “One thing I’ll never get back,â€ he points out, “is paid vacations.â€