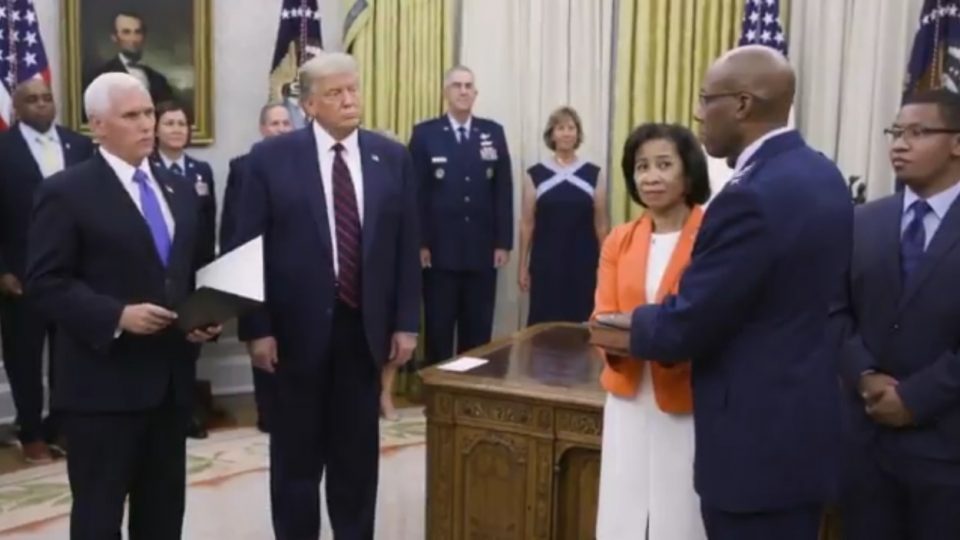 Back in early June, the Senate unanimously confirmed Brown by a vote of 98 to 0.

General Charles Brown, Jr., was formally sworn in today as the next chief of staff of the @usairforce! pic.twitter.com/hkqPrEi9qx

Vice President Mike Pence, with President Donald Trump right by his side, ceremonially swore in Gen. Brown at the Oval Office.

It was my honor to formally swear-in General Charles Q. Brown, the first African-American military service chief in American History. President @realDonaldTrump & I have every confidence our Air Force will only grow stronger under General Brown’s leadership! pic.twitter.com/nILcjhdqTX

Today, Brown officially takes command of the Air Force as its 22nd chief of staff in a ceremony at Joint Base Andrews in Maryland. The chief of staff he is replacing, Chief of Staff Gen. Dave Goldfein has retired.

Honored to congratulate ⁦⁦@usairforce⁩ General Charles Brown at his historic swearing in as the 22nd (and the 1st African American) Air Force Chief of Staff.

(And for the record, whether a General or an Admiral, a 😷 is a strong and Patriotic look!) 💪🏽🇺🇸 pic.twitter.com/0DIpsARzgU

Brown graduated from the R.O.T.C. program at Texas Tech University and served as a command pilot with more than 2,900 flying hours, including 130 combat hours. He was formerly the commander of the Pacific Air Forces, responsible for 46,000 airmen and operations spread over half the globe, including Japan, Korea, Hawaii, Alaska, and Guam.

His current duties will include overseeing all units in the branch, supporting a new Space Force program, in addition to sitting alongside the Joint Chief of Staff in the Department of Defense, the Homeland Security Council, National Security Council, and the president on all military affairs.