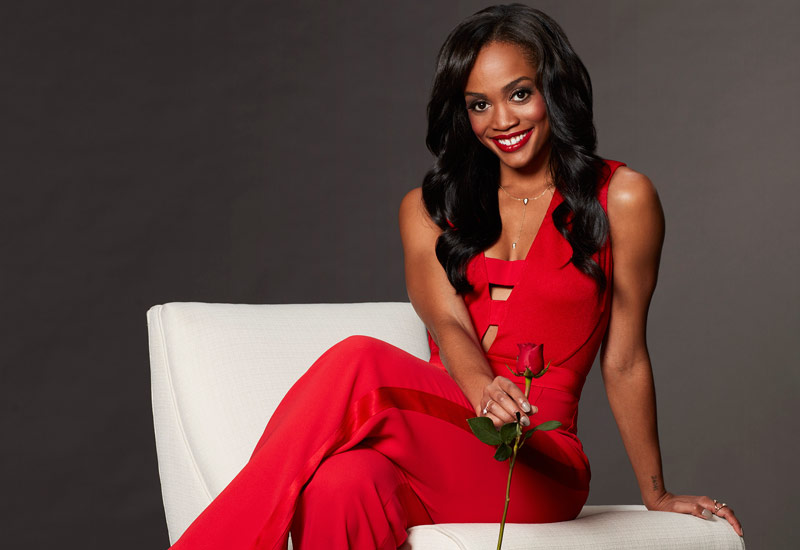 It’s been two years since Rachel Lindsay stepped into the role of leading lady on season 13 of The Bachelorette, becoming the hit reality show franchise’s first black Bachelorette.

With her history-making season premiering earlier this month on Tubi, the world’s largest free movie and television service, the newlywed (she married her winner, Bryan Abasolo, in August in Mexico and is now officially Rachel Lindsay-Abasolo) sat down with BLACK ENTERPRISE to relive her journey.

On doing it for the culture:

“I really wasn’t even thinking that it was going to work for me. And then I thought, you know what, this is bigger than me. This is the first time this audience is going to see someone who looks like me in this role. When I was doing The Bachelor, I had mothers come to me and say, ‘Oh, you know, you carried yourself so well. It was so nice to see someone represented.’ And I thought, I feel like it’s time and I feel like I can do it right. So I don’t think I’m going to find my person but I’m going to say yes, yes to being the first black Bachelorette.”

On putting her career on hold for love:

“When I went on The Bachelor, I knew I still had my job. I wasn’t going to do anything to jeopardize what I had been working for my entire life. After The Bachelor, I went right back to work. I was actually in trial up until the announcement. Matter of fact, when I announced on Jimmy Kimmel, the jury was trying to decide the verdict of the trial that I was in. So I was working up till the very last minute. Once I decided to be [on]The Bachelorette, that’s when the fear came about. I thought, will I be taken seriously in a courtroom? In a deposition, when I’m talking to clients, will I have the same respect that I had before? Because now I’ve been on reality TV, not once, but twice. So it was something that I had to put to the side. What if I found love on this show? What would I be denying myself if I said no because I was worried about the perception that people were going to have of me?”

On the pressures of being the first:

“There was a point on the season that you saw me break down. You see me talking to a producer and you see me saying, ‘You don’t know what it’s like to be sitting here. You have no idea the pressures that are on me, that haven’t been on any other lead that’s come through this franchise.’ I was extremely frustrated and I just felt like no one was getting it because I was looking around the room and no one looked like me. So no one was understanding. You hear me, but you don’t get me.”

On not choosing black love on the show:

“I knew the likelihood of me ending up with a black man was slim to none, just because I know that representation isn’t large on the show and then maybe the type of black men that were going to be on the show, maybe I wouldn’t be into. And I remember telling this to my family: ‘If I choose someone, they’re probably not going to be black.’ It’s just the reality of it when you’re looking at the pool of men that you have to choose from. So, I was mentally ready for that. I knew that if love came to me, whoever it may be, I wasn’t going to let other people define what that looked like. I knew all the noise was going to be there. But, at the same time, I knew that if I was going to move forward in this way, I have to ignore it. I was like, ‘Listen, this is who I fell in love with. And I’m happy.'”

“It’s no secret that I was disappointed that Mike Johnson wasn’t chosen for Bachelor and that once again, we’re going to see another season where we don’t have a person of color in this role. I feel like the system isn’t working and things need to change. And I think the solution is breaking the rules, which they can. We’ve seen it now on Bachelor in Paradise with Demi and Christian, where you brought in someone who’s never been a part of this franchise. And you gave us the first same sex relationship, which is a beautiful thing. Why can’t we do the same, to have a person of color? You just need to interview people of color to step into that role and bring somebody who hasn’t been a part of this franchise. Because the current way isn’t working.”