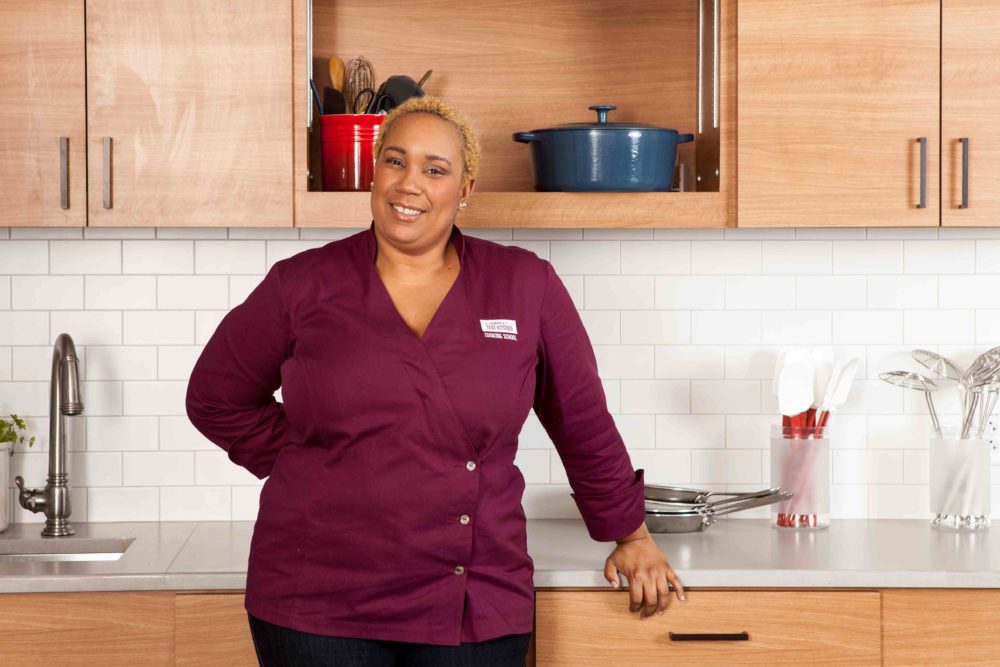 As the first woman of color on America’s Test Kitchen—a PBS TV cooking show, Elle Simone, doesn’t view her “test cook” role as just a job. She believes it’s part of her life’s mission to advance the representation for women of color and provide them with a platform for mentorship, sisterhood, and job placement in the culinary world. “Through my social enterprise SheChef, I’m most proud of the women chefs that I’ve been able to mentor directly, said Simone. Their products are on the shelves of Whole Foods, they’re cooking for celebrities, and food styling with Food52.

“I would like to see the full dismantling of the “good old boys club” ideologies. The ones that condone mental, verbal, and emotional abuse as a measure of gaining respect or shaping chefs. I want more support for those who are choosing to go against the grain of these concepts in order to create positive kitchen cultures. I would love to see our male counterparts stop pretending that it’s such a phenomenon that women chefs are equally capable, and often more so, in the kitchen.”

As a culinary activist, Simone is also passionate about creating safe spaces for all women. “The culinary industry is no stranger to the types of behaviors that spearheaded the “#MeToo movement” and since women are largely the minority of our industry, it is easy for us to slip under the radar,” she said. I’ve always felt that women chefs, especially those of color, needed a place for support and guidance; figuring out how and what that looked like, became a priority for me. I believe it’s great to create beautiful content and create social settings for women chefs but what good is any of that if we don’t feel safe, affirmed, and represented?

Below, Simone shares her insight on how she plans to bridge the culture cap for women of color in the culinary world.

Talk about your role on America’s Test Kitchen.

On the PBS show, America’s Test Kitchen, my role is that of a test cook. The test cooks at ATK work long hours to test and develop recipes to get them to the level of perfection that the company strives for. On the show, the test cook shares with the host some of the challenges of the recipe and the ways in which they overcame those challenges in testing; essentially, making all the mistakes so that the ‘home cook” doesn’t have to. I’m also the food stylist for all the food on ATK TV and our secondary show, Cook’s Country.

What is the biggest thing you’d like to see changed in the culinary industry, and how are you working toward making that change happen?

This year, I moderated two very important panels on the “good old boys club” topic. The first was offered by SheChef Inc. at SXSW in Austin, Texas, about how women create and curate culinary careers. Our panelist were women who have used their unique career paths to start their own food business and how they’ve been able to foster positive kitchen cultures. The latter was with WCR (Women Chefs & Restaurateurs) Conference in Minnesota, where we discussed ways in which women chefs can speak up and show up for each other; reinforcing and strengthening our leadership voices and skills. People can feel exhausted from hearing these conversations time and time again, especially over a long period of time. But my feeling is that until the culinary industry is safe and fully inclusive, the dialogue should continue.

You’re in the midst of launching the Art of the Hustle Event Series for people pursuing culinary endeavors, what’s the purpose behind those events?

These events are a place where women in culinary can have a platform to teach and share about ways they have become successful and also share the mindsets and actions that may have hindered them. The goal is for everyone to walk away with several new ideas to implement that can help sustain their business. I always hope that networking will happen but I’m hoping for a sisterhood that will become the pulse and vein of SheChef Inc.

What’s the one thing you wish you had known before going into the culinary world?

I wish I had known that there are many paths that can be taken in this industry. You don’t have to be a restaurant chef! You can be a purchaser of a food distributing company, you can be a food stylist, you can be a nutritionist! I wish someone would’ve told me that the possibilities were endless, perhaps also that as a black woman, it’d be a bit more difficult but that despite that, I could do anything I wanted.