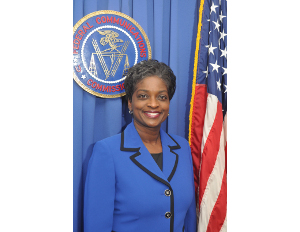 In the spirit of Black History Month, it’s of note that Mignon Clyburn is the first African American woman to serve as a commissioner of the Federal Communications Commission (FCC). She was nominated for the position by President Obama in 2009.

Clyburn’sÂ term at the FCC expires in June.Â She has been a key figure in the heated debate over net neutrality–the principle that the internet should be free and open–as well as other issues involving telecommunications including Obama’s Lifeline program providing cellular and broadband access to low-income families; calling services for the incarcerated to their loved ones; digital healthcare; and more.

With the ascension of the nascent Trump administration, any gains made by the FCC, such as protecting net neutrality, may be endangered. The newly Trump-appointed FCCÂ Chair, Â Ajit Pai, a former attorney for Verizon, has been critical of FCC regulations and policies put in place during the Obama administration. Pai was described in a New York Times’ piece as “a stickler on conservative interpretations of telecommunications law and the limits of F.C.C. authority.

Indeed, one of Pai’s first actions as chairman was to reduce the number of providers involved in the Lifeline program. He is also expected to push back on the FCC’s upcoming case before a federal judge to make calls from prison less prohibitively expensive, according to the same New York Times article. In the meantime, Pai, wrote in a blog post on the FCC site, the dubious claim that one of his top priorities “would be to close the digital divide.

Commissioner Clyburn weighed in on the future of net neutrality under a Trump administration and her time at the FCC in an interview with Black Enterprise. Clyburn has public service in her DNA. Her father is Jim Clyburn, the U.S. Representative for South Carolina’s 6th congressional district. She spent over a decade as a member of the sixth district on the Public Service Commission (PSC) of South Carolina and was its chair from 2002 through 2004.

Black Enterprise: You are stepping down from your role soon. Are you leaving because that was already arranged or because of the new administration?

Commissioner Clyburn: Everyone has a term of service and if you have aÂ full term at the FCC it’s five years. In terms of my service, I’ve had two terms with one partial. I finished one term and I’m currently full term. As of the 30th of June the end of the federal fiscal year, the ball is in the president’s court as to who he appoints next. What happens; even though my term officially ends on the 30th of June, if there is no one appointed, technically, I can serve until the end of this congressional term when Congress adjourns.

BE: What can we expect with net neutrality, Trump, and the new chairman?

Clyburn: They have made it clear there are issues about our 2015 order they have problems with. I believe and I am confident that net neutrality stands. It’s going to be very hard to improve on what I think is the best means of ensuring a free and open platform that has enabled millions in this country and billions around the world to take advantage of opportunity. People have a tendency to focus on some of the big picture aspects when it comes to open internet. I call it open internet because, for me, that describes it so clearly. When we talk about freedom of expression, to flourish, I can’t think of any other platform that has been so empowering. There should be no tolls, no barriers. If you should not prefer my website over another [for example], I should be able to use any device of my choice if it’s not harmful. I shouldn’t be blocked or limited because I don’t have social, economic, or political ties to big business or the industry. It’s going to be difficult to talk people into moving away from the protections we have been allowed.

BE: Is there a conflict between the chairman’s words about mending or narrowing the digital divide and his actions like limiting the Lifeline program?

Clyburn: I’ll put it this way: We cannot be single-focused; so siloed [that] we think [about] just providing infrastructure. The chairman also talked about Gigabit cities and allowing us to enable more broadband infrastructure to flourish.

You’ve got to have affordability. You have to have access. If I can sign on to have access right up to my doorstep [but] I can’t afford to connect…I call it the entire mile, not just the half mile when it comes to infrastructure and investment. What about me being able to afford the device, to afford the connectivity, to be a full and participating citizen? Being disconnected, being on the wrong side of opportunity is not only sad but I think it is a worse state than 20 or 30 years ago if you or I did not have a telephone. That puts you far behind when it comes to being a full and productive citizen of this world and this country. That’s why it is important.

BE: What are the biggest accomplishments of the FCC were during your tenure?

Clyburn: It’s still in the making. If I can put a broad stroke on it, I believe we have been facilitators and enabled the voice for those who have been ignored, who can’t afford to come to D.C. on a regular basis; who can’t afford a high-priced lobbyist. I have been pushing for opportunity for those that honestly, I think were ignored for almost 15 years when it comes to wishing to provide just, reasonable, and fair rates. For those currently incarcerated trying to keep in touch with their loved ones. This agency, I am ashamed to say, ignored those voices. If not for this office, those voices would not be heard.

The Commissioner also mentioned the FCC’s fight under President Obama to give fair leverage to smaller telecommunications providers that could not compete with such powerhouses as AT&T and cable companies.

“When you talk about smaller communications providers in some of the rural areas, they were stuck with spectrum that could not build out–it was not interoperable with other spectrum bands. For 5 or 6 years we said let the industry decide but the big guys [large telecos] weren’t moving. We got 20 or 30 people in a room and we worked it out, we came to an agreement so these smaller providers could better compete, she said.

She is also proud of her contribution to modernizing the Lifeline program; jettisoning it into the 21st century by expanding its offer of voice-only service, to subsidized text and broadband service as well, for low-income families. This accomplishment was achieved despite pushback from those Clyburn calls friends.

“One of the things we took a chance on about a year ago was the Lifeline program. There were some friends in high places who did not want me to touch that particular item. The Lifeline program has not been modernized for about 30 years, only provided support for voice services. As we know, we have migrated beyond voice–having broadband and texting. In order to keep in touch, those things are important. We did not listen to our friends who said it was too politically risky.

Clyburn has also been a fierce advocate for digital health services, in particular, how they can benefit the African American community. “Last thing is we are looking at the intersection of health technology and broadband. At my urging, we established a connected healthcare task force [to discover] what can the FCC do to enable telehealth and telemedicine? How can we work together with our agencies and the public? In a lot of ways, people want to come for mental health issues. The most comfortable way to get service in African American communities, we have a stigma still, but if you have the capacity to speak to your clinician in your home from your connected device then there is an opportunity to address some issues that have been plaguing communities all over the nation; privacy protected, they don’t have to worry about stigma.

After seven years at the agency, Commissioner Clyburn remains optimistic despite the Trump administration’s determination to favor policy on the side of big business and less on the consumer.

“I can’t help but be optimistic,” Clyburn said. She acknowledges that there are still “technology badlands” in the country; cellular and broadband deserts. Yet, she is confident that the Open Internet Order that she and other members of the FCC created, will help those areas “address the infrastructure and items needed to ensure capacity.