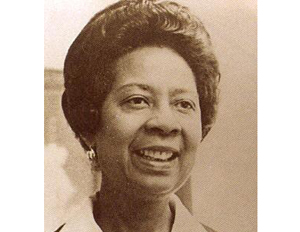 Harriet Elizabeth “Liz”Â Byrd was the first black woman in Wyoming’s House and Senate (Jefferson Hardin was the first African-American elected to the territorial legislature in 1879). According to reports, theÂ political pioneer, 88,Â died onÂ January 27, 2015 at her home in Cheyenne, Wyoming.

Byrd graduated from Cheyenne High School in 1944 and went on to study education at West Virginia State College. After receiving her degree, she returned to Cheyenne to teach but was denied employment in the Laramie County School District because she was a black woman. Determined to actualize her career dreams, Mrs. Byrd taught at F.E. Warren Air Force Base instead, leading to an award-winning career that spanned over 20 years. In 1976, she went to University of Wyoming to obtainÂ an M.A.

Wyoming News reports that Harriet Byrd was voted into the state House in 1981 and into the Senate in 1989, making her the first black person to serve in both houses. Remembering her as a legend in both the Wyoming Democratic Party and the whole Legislature, Rep. Mary Throne, D-Cheyenne, said, “‘She remained true to her convictions'” and she credits Harriet “Liz” Byrd for the Martin Luther King, Jr. holiday observanceÂ in Wyoming. “Liz Byrd was a teacher who shaped the lives of many children and a leader who demonstrated that each person makes a difference. She was a role model for all people, for women and for Wyoming,” said Governor Matt Mead.

A vigil will take place at 2 p.m. on Sunday in Lakeview Chapel at Schrader Funeral Home. A Funeral Liturgy will follow on Monday at 1 p.m. at St. Mary’s Cathedral.