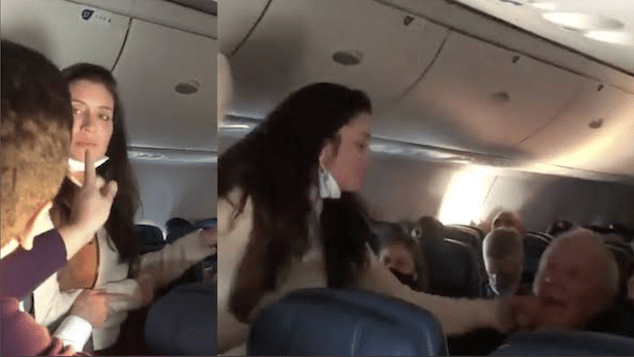 Do we have a source for the screenshot?

A New York woman who was seated in first class landed herself a four-month prison sentence for interfering with the crew after the flight was diverted.

Kelly Pichardo, 32, and another female first-class passenger were removed from a flight from Dallas to Los Angeles last year after they displayed intimidating behavior toward the staff once the flight was diverted to Pheonix, ABC News reported.

Pichardo and the other woman were removed from the flight once it landed at Phoenix Sky Harbor International Airport on Feb. 24, 2021.

Pichardo, a Bronx resident, reportedly spit in one passenger’s face after they tried to record the altercation, NBC NY reported. She also assaulted one passenger and used racial slurs when a male passenger tried to intervene.

After the FBI and Phoenix police investigated, the two women were charged with disorderly conduct for verbally and physically assaulting other customers and flight crew members.

Pichardo was sentenced to four months in prison and three years of supervised release following her prison sentence.

“There is a line between boorish behavior on an airplane and criminal activity, and the defendant clearly crossed it,” U.S. Attorney Gary Restaino said.

“First class passengers are not immune from prosecution: defendant’s verbal and physical intimidation disrupted the travel of passengers and crew alike.”

Pichardo has been ordered to pay nearly $9,200 in restitution to American Airlines. The other woman, identified as Leeza S. Rodriguez, plead guilty and will be sentenced in November.

Every airline has its own internal ban list that is separate from the federal no-fly list. Delta Airlines has banned more than 1,600 passengers since the federal government started requiring passengers to wear face masks. Delta is calling on other airlines to share their lists of banned passengers.